Tomorrow marks the 10th anniversary of NGboo Art, as well as the opening of the 17th International Comics Festival which I will be attending, given that my experimental collage-comic F Mode has been selected for the exhibition. If my records are correct, this is the fifth piece of mine that has been honored by the jury, following in footstreps of Disappearing... (2010), Avant-Garden (2014), Eternal (2016) and Exhausted Peace (2018)...

Now, instead of looking back at the blog's beginning and development that has been supported mostly by my enthusiasm and passion for alternative cinema (and will hopefully be partly supported via Ko-fi in the future), I am going to remind the readers of some (chronologically sorted) articles which have led to / been inspired by successful collaborations, as well as friendships, both online and real-life, that I couldn't even dreamed of and that I highly appreciate.

Divna budućnost ljubavi moja (Marko Žunić, 2014) - the translation and adaptation of this text is included in of my (30) Taste of Cinema listicles, HERE.

Sleep Has Her House (Scott Barley, 2017) - "... there's no conventional narrative or characters in this exploration of cloaked, tenebrous, impenetrable 'otherness'. The very notion of those aspects is obscured by the Moon's timid rays, an owl's piercing eyes, the stillness of roe's corpse, the soaring thunder which announces the End and even by the small intrusions of light..." (When you watch Barley's film on the big screen, the presence of the abovementioned 'otherness' is felt so strongly, you can barely resist it.)

Alchemy on the Amstel (Janja Rakuš, 2016) - "... A whole new world of rich textures and simmering lights lies beneath its surface, waiting to be explored. Our reality perishes and über-reality emerges..." (This is a great opportunity to send another thank you to Ms Rakuš and journalist Melita Forstnerič Hajnšek for the special mention of my name in the article for Slovenian web portal Večer.)

Üres lovak / Empty Horses (Péter Lichter, 2019) - "... the selected sequences, ranging from Snow White and the Seven Dwarfs to Alien, are always in tune with both the protagonists' words, as well as with the author's personal reflections on filmmaking, though at times they do slip into the 'phantasmal domain', to remind us of cinema's ghostly qualities and the fantastical dimension of this respectable meta-creation..."

Luminous Void: Docudrama (Rouzbeh Rashidi, 2019) - "... a medium between our world and the domain ruled by the specters of cinema; it is a session during which the ghosts of many film pioneers are simultaneously invoked, celebrated, communicated with and expelled..." (Crossing fingers to attend the 20th birthday of Experimental Film Society next year in Dublin.)

Notes from a Journey (Daniel Fawcett & Clara Pais, 2019) - "... A bewildering formalistic exploration of inner and outer landscapes via both visual and aural means, it poses a great challenge to the viewer attempting to put the hardly describable experience into words..." (I find Daniel & Clara's sensibility extremely close to mine, which is why I 'dream in exile' and sincerely hope our journeys will cross paths some day soon.)

In a Nutshell: Takatoshi Arai - "... Remaining secretive about the themes and meanings behind the oft-puzzling and dialogue-free juxtapositions of moving images and sounds, he asks the viewers to be active / open-minded and leaves plenty of space for their own different interpretations..." (Looking forward to meeting Arai-san this Friday.)

Auricular Confession (Martin Del Carpio, 2019) - "... Once again, Del Carpio orchestrates a successful collaboration with photographer William Murray who provides the film with the exquisitely composed and tightly edited B&W visuals, making the most of a claustrophobic shooting location." (Not only one of the best shorts I've seen this year, but also one of MDC's films I've designed the official poster for.)

Furnace (Kent Tate, 2019) - "... Although pervaded by the feeling of calm, with Tate's camera acting as a stoic observer, the ostensibly rigid compositions have a painterly quality to them that is simultaneously complemented and counterpoised by the pulsating music created by the author himself..."

Emotive Transmigrations (Camelia Mirescu, 2016) - "... both aurally and visually it manages to conjure some peculiar magic, and leaves you wanting more..." (Mirescu's body of work is worthy of the 'soulscaping' label.)

In conclusion, I present a small selection of my collages from the recently started 'B&W vs. Red' series which sees me feeling comfortable out of my comfort zone. You can follow me on Facebook and, as of late, on Instagram.

That Time Despair Went for a Swim 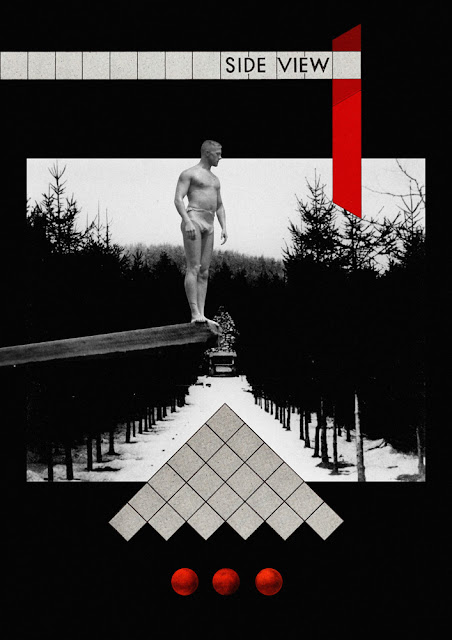 The Perks of Being an Ostracized Martyr 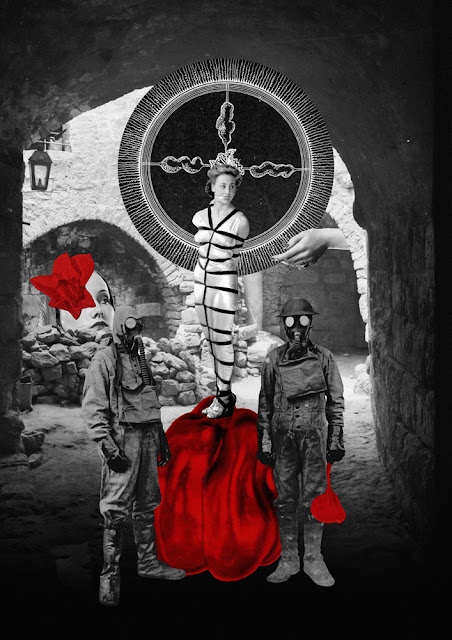 It Will End in Tears 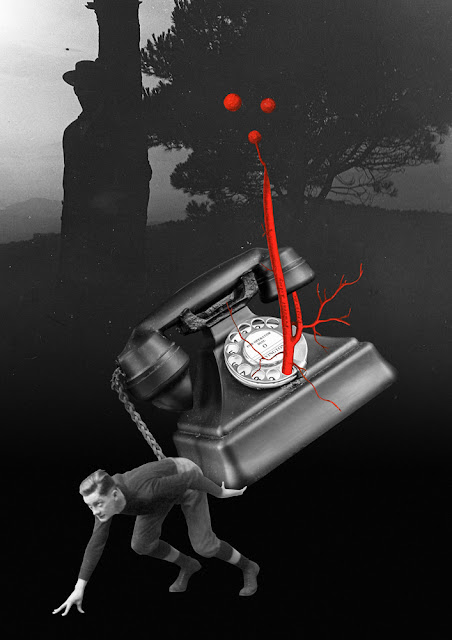 Snow White and the Seventh Perforation of the Void 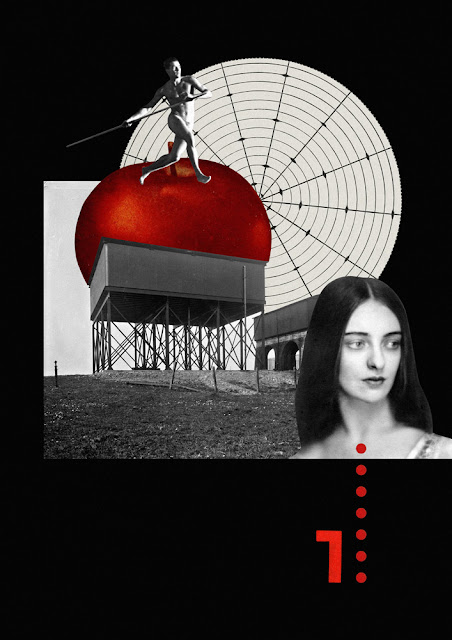 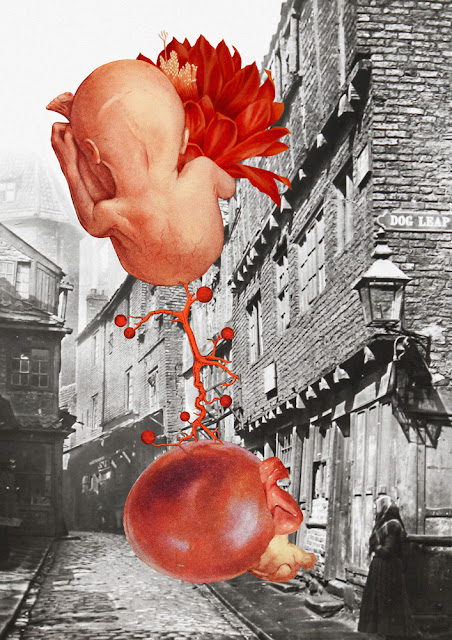 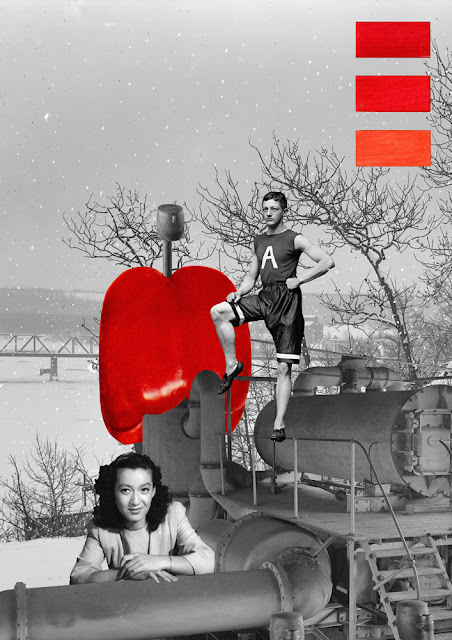 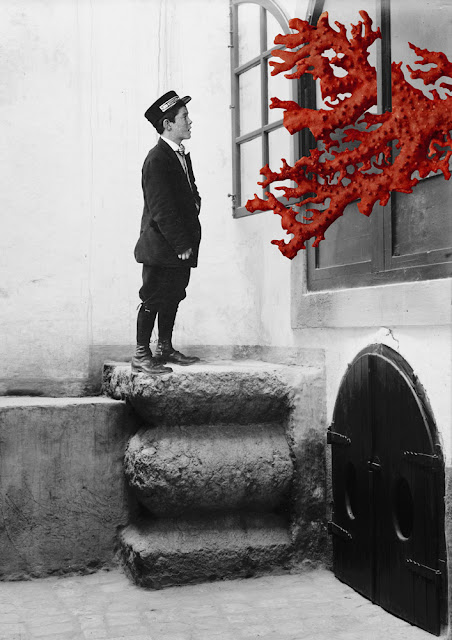