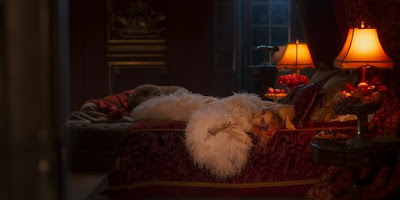 Wearing her influences on the haut couture sleeve, Alice Waddington debuted with a fascinating short Disco Inferno (available at Vimeo on Demand) in which she seamlessly blended baroque excesses à la Jean Rollin's fantastique, a Maddin-esque homage to silent cinema, a few Kubrickian references and some delightfully twisted humor. Oh, and let's not forget the Mephistophelian musical interlude! Four years later, in her first feature, she follows similar approach with just slightly less success, delivering a deliciously campy sci-fi fairy tale that feels like a breath of fresh air, despite drawing inspiration from various (obvious) sources. 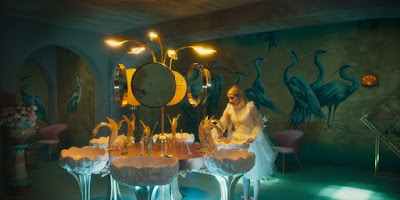 Through the kaleidoscopic, 'crystal chandelier turned mandala' portal in the opening, Paradise Hills pulls you into its magical, anachronistically organized world, effortlessly grabbing your attention and keeping it undivided all the way to the closing credits. We find ourselves at a sumptuous, aristocratic wedding that wouldn't feel out of place in a Tarsem Singh's film, given that the spirit of his frequent collaborator, the late Eiko Ishioka, inhabits the bride's pearly, fencing mask-like headpiece, as well as the guests' garments. Even after we're transported to a remote (Mediterranean?) island where most of the story (told in flashback) takes place, the costumes' captivating extravagance (many kudos to Alberto Valcárcel) remains one of this fantasy's strongest points. The traces of Victorian and Lolita fashion are clearly visible in the 'uniforms' and nightgowns worn by the sassy heroine Uma (Emma Roberts, tolerable as a rebellious 'Upper') and her friends who are all the unsuspecting protégés of a 'center for holistic and sustained healing' - think offbeat boarding school modeled upon the one from Lucile Hadžihalilović's Innocence. 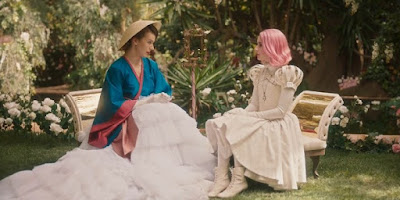 Now, this is a proper moment to mention the headmistress of the said establishment, the enigmatic Duchess portrayed by Milla Jovovich who seems to have a whale of a time chewing the scenery and channeling she-wolf in sheep's clothing or rather, a rose well-versed in concealing her thorns. While her true identity lays dormant behind the yards of silk, satin and tulle, some of which is utilized for an eclectic 'kimono meets Southern belle' dress, she and her 'white knight' minions go about their daily jobs of transforming young ladies into better versions of themselves, 'to fit their surroundings' exact desires'. The most bizarre of the methods they employ involves a Renaissance-inspired altar equipped with a merry-go-round horsey and state of the art system for holographic projections, so it's safe to assume that Waddington plants her tongue deeply in her cheek to tackle the themes of identity, feminism, individuality, (counter)conformity, public image and (dualistic) class stratification. 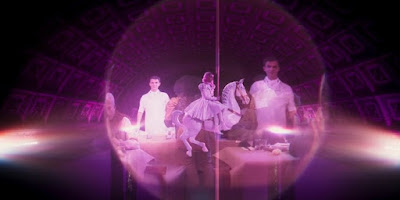 However, the emphasis is most definitely not on the narrative, messages or characters who come off as archetypal, but rather on the refined, decidedly feminine visuals laced with gentle irony and beautifully complemented by Lucas Vidal's unobtrusively evocative score which heightens the otherworldliness of the atmosphere. Laia Colet does wonders with her production design, borrowing from M. C. Escher's work, Art Nouveau and Retrofuturism for the eclectic architecture of the titular institution, and looking up to Argento's Suspiria for the lighting solutions in certain scenes of the film's final third. The critically acclaimed horror also serves as an excuse of sorts for the flexibility / looseness of inner logic and for the eschewing of substance in favor of the aesthetically pleasing form. And one cannot help but notice bits and pieces of Disney and Japanese animation being built into the surreal universe of Paradise Hills. Neatly capturing all that splendor is DoP Josu Inchaustegui. Alice Waddington sure has a knack for inviting imagery, so her next project will be noted as worthy of anticipation in this writer's book. 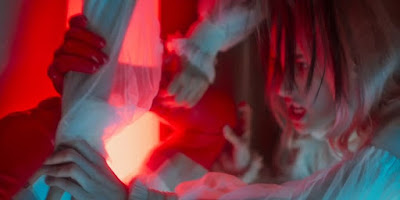