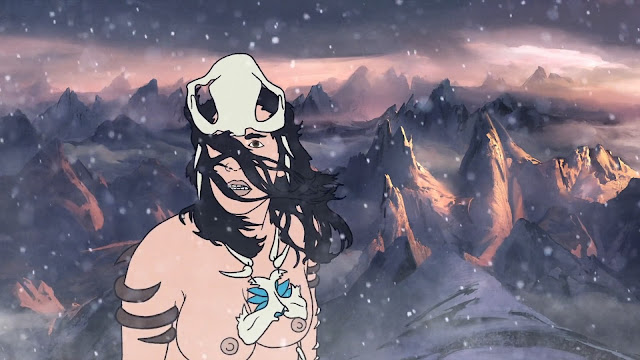 It’s been a long, long while (read: almost four decades!) since a rotoscoped sword & sorcery feature hit the big screens, which is why I’ve been burning with anticipation for Gelatt & King’s dark fantasy whose seed was planted in 2013 short Exordium. And though I couldn’t see it in cinema, I immensely enjoyed it not only as an incredibly nostalgic throwback to the times when I was first discovering adult animation, but also as an unashamedly pulp and esoteric piece of (post)modern art carved with lots of love.

Heavily influenced by Ralph Bakshi’s Fire and Ice that informs its barbaric and magical setting, as well as by Heavy Metal from which it borrows the anthology-like narrative structure, The Spine of Night delves into larger-than-life questions, earning comparison to the metaphysical works of both René Laloux, and Mamoru Oshii. (In a Letterboxd interview, the authors recommend Gandahar and Angel’s Egg, inter alia, and I wholeheartedly agree with their choices.) Told from a perspective of a swamp sorceress, Tzod (voiced by Lucy Lawless of Xena and Spartacus fame), and spanning across centuries, the unsparing story recounts the ultra-violent history of struggling against a vicious force that perverts the desire for knowledge / truth into the unquenchable thirst for ultimate power. The authors put you in turbulent medias res, wasting no time for long expositions, and simultaneously building their bleakly imaginative world which I wouldn’t want to live in, but couldn’t get enough of. 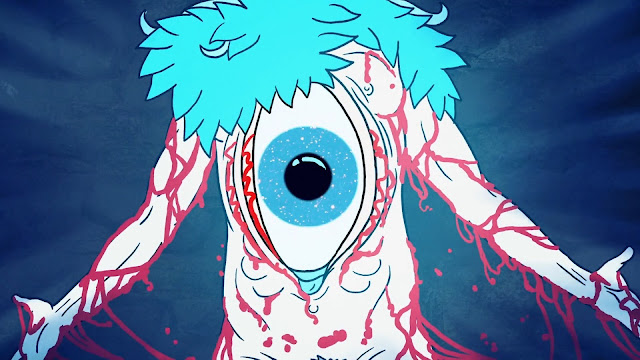 Many heroes fall in the seemingly never-ending battle – some in the most gruesome ways imaginable – so it is death that imposes as the main protagonist, and rules the cruel, bloodthirsty universe. Warriors, scholars, bird people, common folks and even gods are seen with their eyes poked, limbs torn, guts spilled, skin burned, heads decapitated or bodies split in halves, as the film’s exploitative aspect gets converted into the raw, mystical, unadulterated poetry of humans’ most primal urges. Its extremely graphic nature and aura of mythological primordiality are further emphasized by prominent displays of nudity that is decidedly non-sexualized, but rather intrinsic.

What comes as a surprise are shy glimmers of hope (and rebirth) penetrating through the thick clouds of flesh-tearing destruction, and sprinkling the eternal night with tiny drops of color. Speaking of which, the artists opt for a predominantly earthy palette, attaching a beautiful sky/electric blue to a mysterious flower – a sort of a holy grail – that is central to the plot. All the characters are given simple, yet memorable designs, with thick lines and ‘flat’ shading making them pop-up from the picturesque backgrounds that take us from snow-covered mountains to mold-infested dungeons to high-ceiling edifices inspired by Gothic architecture. Despite the obviously limited budget, The Spine of Night provides some impressive visuals, appearing like a proudly eccentric diamond in the rough amongst the over-produced CG offerings that saturate the market today. Complementing its refreshingly offbeat imagery are top-notch sound FX, solid voice-acting evocative of the 80’s, and the unobtrusive, swollen score that intensifies the film’s doomy atmosphere.

The cult status is on the horizon... 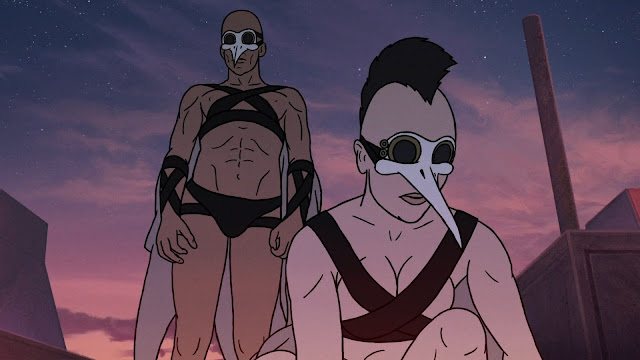