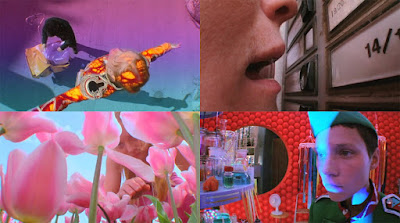 Pepperminta the film is quite similar to Pepperminta the character - it's "probably like a carrot, neither too sweet, nor too sour, nor too hot, nor too salty". And it is the debut and, so far, the only feature-length offering by the Swiss visual artist Pipilotti (real name Elisabeth) Rist who is, judging by the infectious optimism and childish idealism which emanate from virtually every frame, almost certainly one of the top five most positive people living today.

So, it comes as no surprise that her titular (alter ego?) heroine sets on a mission to liberate everyone she encounters from fear, encouraging them to grab life by the balls, step out of the comfort zone and swing to the rhythm of all the colors of the rainbow. Whimsical and non-stop in touch with her puckish inner girl (Noemi Leonhard), Pepperminta (gleefully portrayed by the freckled, ginger-haired first-timer Ewelina Guzik) is a smiling, hyperactive, Pippi Longstocking-like young woman who keeps her grandma's soul in some sort of silver, apple-shaped music box, with a ballerina replaced by a rotating plastic eye.

Using "color hypnosis" she learned from her nana, she seduces a chubby mama's boy, Werwen Candrian (Sven Pippig), and a tomboy-ish florist, Edna NeinNeinNein Tulipan (Sabine Timoteo), who both help her spread joy, increase their neo-hippy "army" and paint everyone and everything that can be painted. On their quest, the trio wreaks havoc amongst some uptight professors and customers of an elite restaurant, but also manages to make a priest squeal like a seal for altar servers. They also escape a speeding penalty by virtue of a fancy snail, cellophane magic and white chickens.

From the puddle splashing and fruit squishing introduction and all the way to the excessively happy ending, Pepperminta plays out like a wet kaleidoscopic magic-realist dream bristling with overwhelming energy. Delightfully chaotic and weird as blue spaghetti or as pressing a doorbell with your tongue, it provides plenty of succulent eye-candy, whether through the strawberry-fueled stop-motion or via wildly imaginative set and costume design paired with POV and underwater shots, surreal rear projections or twisted and upside-down camera angles. The eccentric, orgasmic, psychedelic visuals are complemented by the unpredictable score featuring a few musical numbers that help "night and darkness suddenly vanish from our minds".

Rist delivers a carefree adventure, setting her own rules, challenging negative body image and dyeing feminist themes in menstrual blood-red, while overcoming the ickiness of drinking the just mentioned fluid as a part of the healing process. She says that "it's always the right time to be born" and depicts the world (and even death) through rose- and the-rest-of-the-spectrum-colored glasses which may turn off some of the most cynical viewers. On the other hand, those who are in the mood for the total opposite of doom and gloom will get a good dose of exhilaration from her Looney Tunes-esqe protagonists and the wacky proceedings akin to a thrill ride in a yellow dumpster. 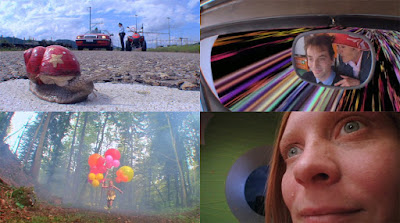