Ghost of the Golden Groves (Harun-Al-Rashid, 2019)

"The collared cow is not a cow, it's a bird you see
In Wall Street, in Harry's office, yeah, that's where he will be." 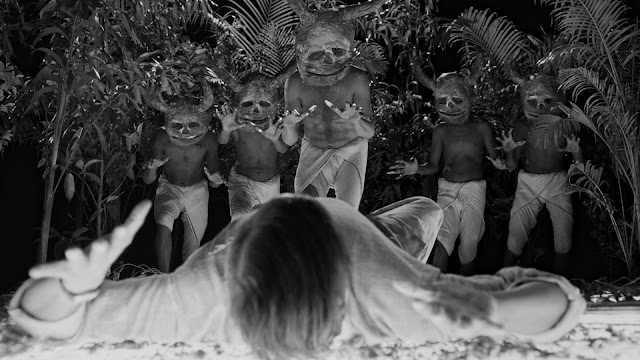 Working under the moniker of Harun-Al-Rashid - the character from One Thousand and One Nights - to 'create an aura of mystery' around their work, Aniket Dutta and Roshni Sen deliver one of the most striking feature debuts in recent memory. Leading both the unprepared viewer and their protagonists to the heart of Shonajhuri (golden grove) forest, they weave a fantastical story in which the playfully ominous spirits from the past and the future take over the film's present and plunge it into a sort of a surreal turmoil.

Set in the 1960s that, so to say, keep the young auteurs in touch with their Nūberu bāgu role models, namely Suzuki, Shindo and Teshigahara, Ghost of the Golden Groves (originally, Shonajhurir Bhoot) is split into two seemingly unrelated parts eventually coming together in a fourth wall-breaking dimension. The first (and shorter) chapter titled The Polymorph focuses on a survey officer from Kolkata, Promotho, who brings deforestation plans to the rural Bengali area, only to find himself a victim of the locals' superstition and bizarre, inexplicable occurrences. In the second, deliberately paced segment Maya, a poor cook, Bibhuti, accepts a caretaker job in an abandoned villa owned by an eccentric millionaire and situated deep in the woods, gradually falling under the peculiar spell of a beautiful, enigmatic woman and the 'others'...

Revealing more about the two (poor) guys' predicaments would have us treading the spoiler territory, so let's just say that we're provided with the singular, delightfully disorienting experience. If one were to describe the film in the shortest way possible, it would probably go like this: "Kafka meets Lynch in a sci-fi folk tale of an alternate, Holy Motors-like universe." However, it does much more than wearing the numerous influences, from Indian tradition and outré cinema to absurdist theatre and dystopian literature, on its sleeve, although it's pretty hard to pinpoint what that is exactly. Call it 'je ne sais quoi' or the amorphous (or rather, polymorphous) result of a deeply intuitive process, but you simply can't deny its strong presence rendering the whole proceedings fairly dreamlike, very 'meta' and occasionally humorous, especially during Bibhuti's encounters of the weird (and not to mention unexpected) kind.

Technically apt and formally exciting, Ghost of the Golden Groves captivates from the initial, beautifully composed and optically tricky shot (which introduces us to Promotho) and keeps us in its grip until the closing credits. DoP Basab Mullick does a wonderful job at capturing the magic (and ominousness) of Shonajhuri forest, as well as the 'ruin porn' glory of the aforementioned villa, using perfectly timed intrusions of color (a giallo-esque one being the most memorable) to underline ruptures in the film's twisty reality. Equally engaging is the eclectic soundtrack by Aniket Dutta - a bold mixture of jazz, rock, folk, dance and ambient music that establishes the atmosphere of irrational exuberance, spicing up this charming ode to filmmaking with farcical music video interludes. Add to that the impressive synergy between the co-directors and the great cult potential their first offering brims with, and you have yourself a highly recommendable piece of modern cinema. 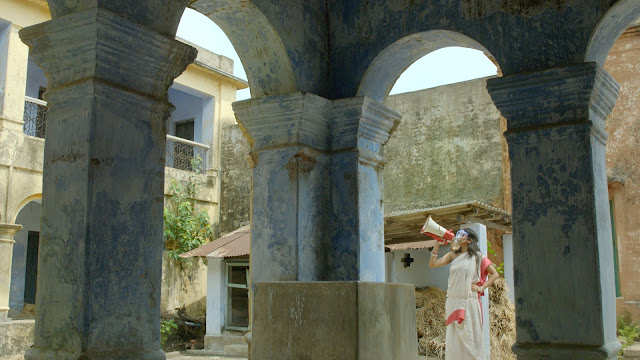