A spiritual sequel to both The Antiteater of Ten and Mother's Milk, the latest effort from Venezuela-born, NYC-raised musician and filmmaker Martin Del Carpio marks a significant milestone in his career. Opening with a dedication to his ailing father, and channeling the spirit of his late mother, Auricular Confession is his most personal work to date, yet it is equally universal in its exploration of innate / essential dualities of human existence. Inspired by the author's Catholic upbringing and imbued with his intense desire to relieve himself of the emotional and mental ballast, this experimental monodrama has a lot to offer.

Once again, Del Carpio orchestrates a successful collaboration with photographer William Murray who provides the film with the exquisitely composed and tightly edited B&W visuals, making the most of a claustrophobic shooting location. An almost empty room furnished with an old chair and table (with the inscription that reads 'in remembrance of me'), and an abandoned bathroom adorned with a stylish lamp are effortlessly turned into a solitary confinement for the unnamed protagonist. Almost certainly the author's alter ego, he is portrayed by Esteban Licht who often bares his all, and in such vulnerable state, pours his soul into a commanding performance ranging from expressionist to mime-like. His enigmatic character can be interpreted as a figure who is simultaneously a saint and a devil, life and death, conductor and the conducted one, which is reflected in minimalist costumes involving a plague doctor mask, inter alia, as well as in props such as tarot cards (The Moon, to be more specific).

Molded by a firm directorial hand, Auricular Confession also boasts a brooding, somewhat esoteric atmosphere established through the great synergy between Murray's adept cinematography and Del Carpio's own music which switches from eerily ambient (Camera Obscura) to - this may sound like an oxymoron - mournfully carnivalesque (El Tirano). Fascinating! 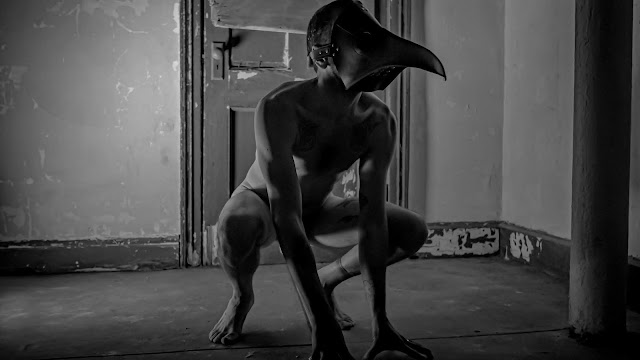 (The review is based on a private screener.)
Објавио Nikola Gocić у 8:07 PM