☼☼☼☼☼☼☼☼ out of 10☼
"Fear makes everyone see the same things. Conscience is quite a boring projectionist.”
And for that reason, Péter Lichter (Frozen May, The Rub) ventures boldly into the subconscious territory, guiding us through the labyrinth of cinematic memories emerging from the 'found footage', i.e. the scenes borrowed from numerous classics. Being a collage film, his third feature will almost certainly earn some comparisons with the likes of György Pálfi's brilliantly tailored love story Final Cut: Ladies and Gentlemen and/or Guy Maddin's The Green Fog - a witty reimagination of Hitchcock's Vertigo. However, its essayistic approach may limit the audience to the most devout arthouse aficionados and well-versed cinephiles.
The driving force of Empty Horses is a casual, yet insightful conversation between the ghosts of two great Hungarian filmmakers - Mihály Kertész who's better known under his Hollywood moniker Michael Curtiz and Gábor Bódy who left this world too soon (aged only 39), under mysterious circumstances. Voiced by Pál Mácsai and Roland Rába, respectively, they discuss about their personal and cinema histories, touching upon their own differences, and of the stark contrast between American and European motion pictures. Delivered in a deadpan manner and punctuated by periods of profound silence, their posthumous chatter gets progressively 'juicier', as the inside details from the 'dream factory' are revealed by Curtiz. Whether his anecdotes are grounded in truth or gossip, the descriptions of Orson Welles as 'that giant hysterical baby' and of Jack Warner as 'a cynical fast-talking clown' remain wryly humorous.

In Welles's alleged urinal confession about stealing all of his ideas from Curtiz, during the Oscar afterparty in 1947, one can recognize Lichter's keen sense of brutal self-irony, considering that the great deal of Empty Horses is composed of 'borrowed' art. Later in the film, he slyly utilizes Bódy's opinion as a sort of an excuse for relying on visual quotes, without resorting to the aggressive modifications of the celluloid tape that he is recognized for. Speaking of visuals, the selected sequences, ranging from Snow White and the Seven Dwarfs to Alien, are always in tune with both the protagonists' words, as well as with the author's personal reflections on filmmaking, though at times they do slip into the 'phantasmal domain', to remind us of cinema's ghostly qualities and the fantastical dimension of this respectable meta-creation. 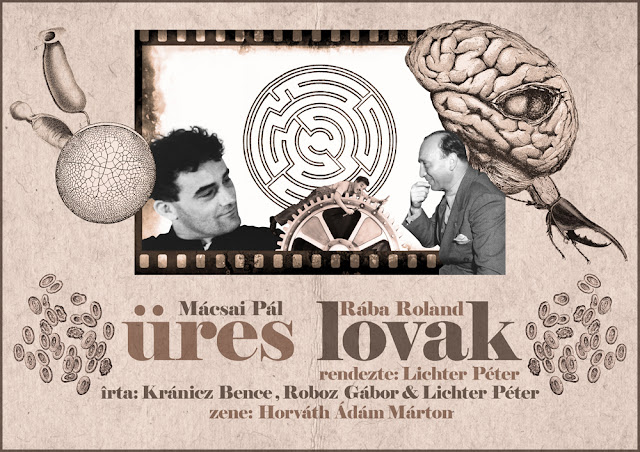 The review is based on the screener provided by Péter Lichter.
The official poster design by Nikola Gocić.
Објавио Nikola Gocić у 9:21 PM