Last night, I turned off all the lights, laid on the couch, tucked myself into a blanket and dreamed myself into a strange journey. Following a thin red line between reality and fantasy / raw and transfigured memories / the United Kingdom and the kingdom of shadows, I visited places unknown, yet somehow familiar. Were those the landmarks of a collective soul?

The latest mighty offering from directorial duo of Daniel Fawcett and Clara Pais is yet another triumphant piece of the experimental cinema. A bewildering formalistic exploration of inner and outer landscapes via both visual and aural means, it poses a great challenge to the viewer attempting to put the hardly describable experience into words. It starts off as a traditional travelogue, with verdant hills and pastures captured by the camera's unblinking eye through the train (or bus?) window, and accompanied by the evocative string music. But very soon, it shows the first sign of its whimsical design - a shot of a forest barely discernible in the fiery red haze. And then, in a matter of minutes, the image turns nocturnally black, Jarman-invoking blue and snow blizzard-like white - think suddenly being woken up by the blinding rays of the Sun so you might get the impression of what to expect here.

The abovementioned line dancing to the rhythmical clatter portends the mystery which transcends our understanding and harks back to the primordial times. It is the mystery that exists and burns in all of us, yet no one is capable of grasping it, despite the overwhelming sensations stemming from its flame. Maybe its resolution is hidden in the darkness of the room where we are introduced to the authors simultaneously playing themselves and the unnamed characters striving to come closer to the spirits of nature (read: the Universe). When they're not meditating in the very heart of Umbra, we can see them taking field recordings or feel them filming the footage to be 'transformed into artefacts', as they state themselves, that will have our perception tested and our dream of their film deepened or turned into stardust.

Notes From a Journey could be considered a logical continuation of their Studio Diary series, given its autobiographical roots, but it is also the meeting point for their previous features. It possesses the mutating abilities of Savage Witches, the performative rituality of Sacrificium Intellectus, the wanderer's mentality of In Search of the Exile, the alchemical qualities of The Kingdom of Shadows and the introspective, sound-only sequences of The Black Sun. (Writer's note: I still haven't seen the latter film, but I did read the extensive Exploding Appendix interview which sheds some light on it.) Part poetic documentary and part enigmatic fiction, it simultaneously externalizes the 'psychic' world and dissolves the tangible world into liquid or rather, ethereal abstract entities. Adding a lot to its peculiarity are the mound and Neolithic henge monument of Avebury - the leitmotifs of a fragmented narrative and the embodiments of invisible forces at work, not to mention those couple of scenes that wouldn't be out of place in the much loved 8th episode of Twin Peaks: The Return.

Once again, Daniel Fawcett and Clara Pais prove to be filmmakers of singular vision, so I will be eagerly looking forward to their upcoming efforts, including what appears to be the bluest of their films titled Plot Points. 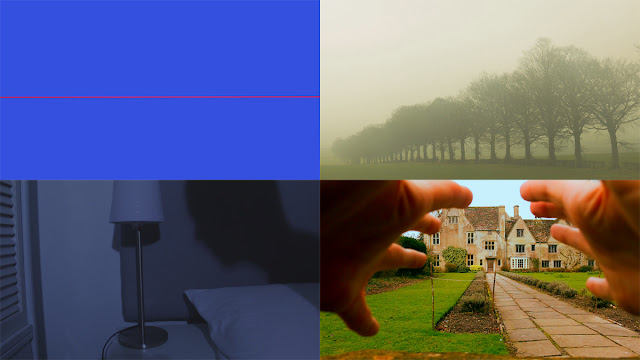