"All acts spring from the will of Ra. He sees all things.
All thoughts are in the heart of Ra."

For her debut and so far, unfortunately, only feature, Lesley Keen shifts focus from Ancient Greece to Egypt, giving birth to one of the most astonishing classic animated films. Consulting with the Egyptologist Dr Geraldine Pinch, she honors the rich cultural heritage of the said land in a sumptuous fantasy that is unfairly forgotten today. 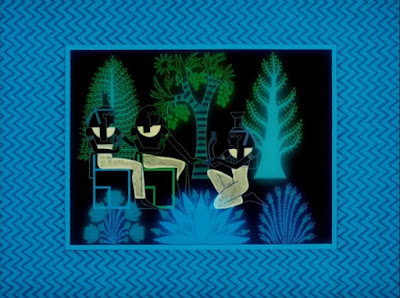 A passion project four years in the making, Ra: Path of the Sun God reflects its author's intelligence and skill, expansive vision and fertile imagination. Divided in three acts, it initially merges several genesis myths into a single one, focusing on Isis and Osiris and their battle against Set (Dawn: The Creation). The next part is Noon: The Year of the King which depicts the birth and life of the Pharaoh whom Ancient Egyptians believed to be the son of Ra. Finally, in Night: The Gates of the Underworld, we follow the Pharaoh on his afterlife journey in the boat of Ra and witness his resurrection at dawn of the new day. 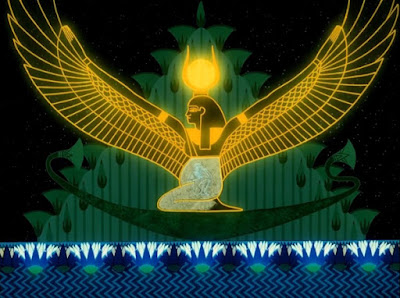 Once again, Keen does writing, directing and animating, but this time, her team is twice as large, with Mike Campbell behind a rostrum camera - a specially designed device which provides great optical effects and seamlessly combines them with traditional animation techniques. The gorgeous imagery (slightly reminiscent of some Ishu Patel's works) rests upon the Egyptian fresco and papyrus painting with all their distinctive traits. However, the artist allows herself freedom to modernize it to a certain extent, giving it the looks of a neon-lit, frequently psychedelic and occasionally abstract phantasmagoria of hypnotic transitions and transfigurations that occur in the blink of an eye. 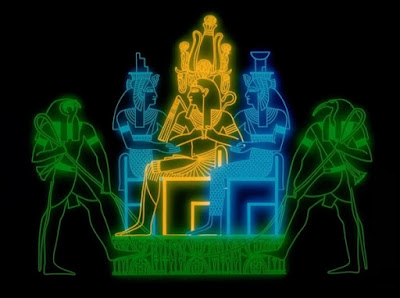 Accompanied by the ethereal, drone-like music and sublimely soothing narration (the impressive voice-over debut by Tamara Kennedy who's later assisted by Michael Mackenzie), Keen's glowing line work against the black backdrop appears as embedded with mystical qualities. As 'history of Gods' repeats, so does certain scenes replay in what may be described as a deliberately paced dream of the Divine King's soul. Ra is pure audio-visual poem of spiritual, otherworldly beauty. 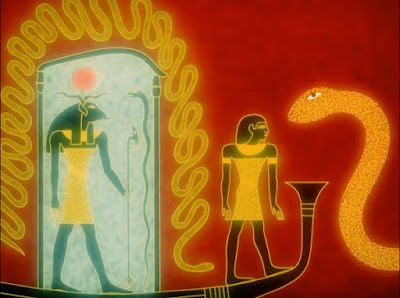