Now, here's something you definitely don't see every day, even if you're no stranger to both contemporary and classic experimental cinema. A majestic tour de force of deliberate (not to mention delightful) silliness paralleled by a nonstop series of unexpected narrative shifts, Die Angreifbaren follows a couple of modern-day multidisciplinary performers, Mary Blick and Zeno Conradi (portrayed by the authorial duo), whose day-to-day existence involves everything from tending their 'patchwork family' to dealing with dark, supermundane forces.

Split in four episodes, each crazier than the last, the film starts with a car ride during which we are hastily introduced to our protagonists who - dressed as some sort of post-apocalyptic barbarians - rush to their workplace. After they pick up a colleague, Max (Carsten Ludwig), wearing a costume that defies any attempt to be described, they discuss marital sex, as the radio broadcasts a talk-show on crying and hypersensitivity. Oh, and there's a phone call that interrupts their 'debate' during which we are left with a question: What does vegan food and feminism have to do with each other?

Soon, we realize that they're all the stars of an extremely eccentric re-imagination of Jean Epstein's gothic horror The Fall of the House of Usher whose director Géza Gazàr (Clauda Basrawi) shouts the gibberish version of German into her megaphone whenever she's displeased with the actors' performances. On the minimalist set, we meet acrobats and one of a few martial artists who is forced to act as a mediator in a case of domestic violence. To cut a long story shot, what follows is a precarious bicycle ride, an encounter with the Cowboy neighbor, and preparations for the grand opening of a theme park featuring illegal MMA tourneys, a clown audition, jam sessions and a milk-focused lesson in mass-building.

If this sounds like your type of shenanigans, you will certainly just go with Cmelka & Mentrup's meandering flow, enjoying their own and their Frankensteinian creation's ferocious idiosyncrasy which, for some reason, brought to this writer's mind Ulrike Ottinger's Freak Orlando as the only reference point. However, once you scratch under the burbling surface, you will notice the irony-fueled mix of biting social commentary and a droll, free-form parody of today's 'cinema of attractions', as the synopsis informs us. Although the film could have used less talking and some snipping here and there, it does manage to impress with its sheer energy or rather, hyperactivity, taking you on a wild ride against all imaginable tides. Unapologetically low-key in its aesthetics, it provides you with some pretty memorable imagery accompanied by the cool soundtrack that's as eclectic as the cast ensemble. And it proudly flaunts its many quirks. 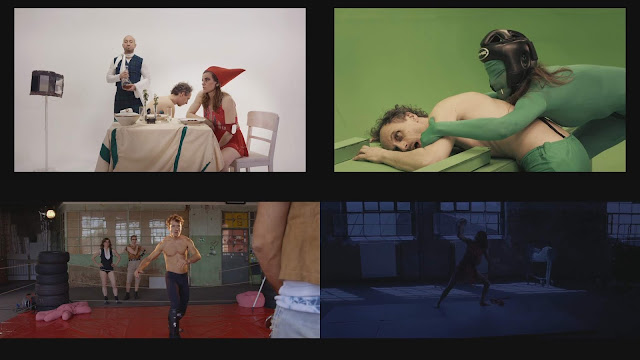 (The review is based on a private screener.)
Објавио Nikola Gocić у 9:44 PM