Fascinated with the prospects of astral projection, as well as with the possibility of existence after our demise, Brennan Vance explores the themes of life, loss, death, identity, family strife, self-estrangement and (new age) spirituality in his mesmerizingly soothing feature debut. The 'vaporous' story, as the author himself puts it in the Kinoscope interview, revolves around an aged ex-addict, Alma (real-life painter Gera Pobuda in her powerful first-time performance that is occasionally reminiscent of Grace Zabriskie), who attempts to bring her comatose husband Terry (Lawrence Sutin in a 'handicapped' role) back from a dreamland with the help of her grief-stricken, absent-minded step-son, Thad (Peter McLarnan, excellent), and a Bhu'Janti pastor referred to as Master (Sally Wingert, extremely convincing). Ably utilizing the aforementioned fictitious religion as a narrative device, both deadly serious and with his tongue planted firmly in cheek, Vance delivers an intriguing combo of a melancholy-fueled character study and a road movie to the soul, not unlike Francisco Athié's 2003 offering Vera.

Right from the start, it is clearly implied that The Missing Sun is a mood piece, rather than a plot-driven drama, and what an odd mood it conjures! Simultaneously numb, doomy, sublime, oneiric, relaxing, mystifying, and 'named yet indefinable' just like divine light in which the Bhu'Janti followers seek for answers, the film's atmosphere is so dense, you can almost touch it. Achieved via the holy matrimony between the exquisite cinematography and meticulous sound design, it renders the viewer entranced, even falling for Master's comforting mantras. As Alma's hazy reality dissolves and turns into an out-of-body experience, we are treated to a deliberately unfolding series of wonderfully composed B&W shots (of weary faces and slumbering nature), interrupted by abstract outbursts of bright colors - probably standing for the passages to astral plane - only on two perfectly timed occasions. Most of the action takes place in what could be described as a hypnagogic reverie that emerges from the protagonist's fractured state of mind, so we're never quite sure what's real and what's the figment of her imagination, or rather when and if those couple of hallucinatory portals open. Although joy is literally gone with the passing of Terry's ex-wife and Thad's mother Joy, this low-key gem of personal indie cinema is not depressing as one might expect - in its admirable interweaving of slowly moving images and minimalist soundscapes, it comes off as healing. 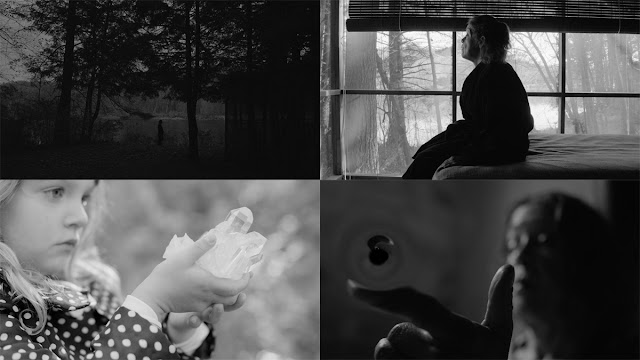