A more than worthy successor to Jann Clavadetscher's 2018 debut feature Kino Hospital, The Underworld takes a similar meta-fictitious approach, with a couple of EFS own filmmakers, Atoosa Pour Hosseini and Michael Higgins, joining a dangerous cave expedition led by an unnamed explorer greatly portrayed by the Irish company's regular collaborator Cillian Roche. The mission, without any doubt, mirrors the Society's exploratory endeavors, whereby a 'bizarre mutation' the protagonist undergoes stands for the(ir) cinema's transformative qualities. In fact, it appears that it is the very film that makes Roche's character go nuts.

Similarly to Phantom Islands, the line between a finished piece and 'behind the scenes' gets broken on a few occasions, the first of which sees 'Dr. Baron Von Mertzbach' himself assisting the shooting (for the uninitiated, read The Metamorphic Portrait of Jann Clavadetscher). Those spontaneous 'pokes' at the fourth wall act as the intrusions of alien forces that take possession of the explorer, and send him down the spiral of madness. They could be identified as Entity of Haze (remember the 'paradigmatic impulse' from Homo Sapiens Project?), especially considering the fact that The Underworld's author starred in Rashidi's short of the same name. Oh, the wonders of avant-garde science fiction!

Whatever the case may be, Clavadetscher's (meta)film stands tall as a riveting, mystifying and somewhat quaint audio-visual experience, boasting the suggestive, increasingly unnerving sound design and magnificent 16mm cinematography dominated by dark blues of (the color-graded) Aillwee Cave and piercing reds of the uniforms. The dense, 'patinated' texture of its dazzlingly edited imagery makes it a perfect candidate for a dream double bill with the recently reviewed Kinetics - you can bet your money that their complementary energies feel amazing on the big screen. 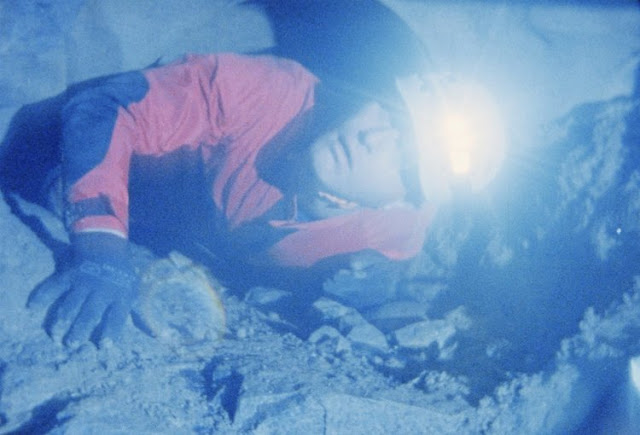 (The review is based on a private screener.)
Објавио Nikola Gocić у 1:05 PM