A gloriously beautiful shot of the Waxing Gibbous Moon high in the dusky sky of mellow violets and soothing oranges marks the silent introduction to the latest offering by the EFS 'memory weaver' Atoosa Pour Hosseini. The memories that she weaves into a soft dream-tapestry could be interpreted as the reflections of the auteur's inner workings ('turmoil' may be too strong of a word) transformed into 'intensely lyrical explorations of displacement' through the medium of film, as noted in the official synopsis. They are carried - metaphorically speaking - on the wings of an ostensibly fragile hybrid creature (the Simurgh's long-forgotten daughter, perhaps?) who appears as a young woman wearing a golden, bird of prey mask.

This 'primeval female figure' (embodied by Katie O'Neill in a magnetic and uninhibited performance) finds herself secluded on a sunbathed island (the uninhabited Blaskets of the west Irish cost, according to Aidan Dunne's article) surrounded by the wistful blue of the sea - the central leitmotif. Simultaneously lost and deeply invested in the unfamiliar (not to mention breathtaking!) surroundings, she sets on an introspective quest that will end in a rapturous, ritualesque dance of self-discovery, at the remnants of a fortress or rather, a sacrificial ground. Through a series of elegant movements, Ms O'Neill enchants the viewer, retaining the aura of mystery which surrounds her character who, at one point, embraces her feral nature (code: a goat carcass). As day turns to night, her timidity is replaced by determination, as the piercing gaze in the final shot suggests.

From both technical and aesthetical point of view, Kinetics is nothing short of brilliant. Drenched in Karen Power's brooding score, Pour Hosseini's grainy, 16mm cinematography perfectly captures the mood of a lost time and space, turning her film into a cinematic equivalent of a deconstructed myth informed by personal experience. Engagingly edited, the delicate visuals speak eloquently and directly to one's soul. Eleven minutes of pure delight. 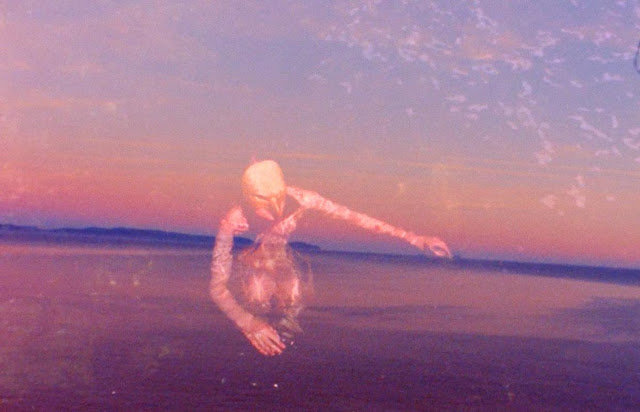 (The review is based on a private screener.)
Објавио Nikola Gocić у 7:43 PM