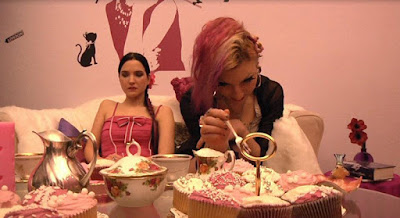 Distributed by Troma Entertainment (whose co-founder Lloyd Kaufman appears in a cameo role as a pet-shop owner in a scene that might be referencing Gremlins), Spidarlings is a nice piece of schlock cinema and a true representative of 'Après Vague' which stands in its production company name. A feature debut for the multidisciplinary artist Salem Kapsaski, it delivers hammy fun in spades, while it has something to say (and at many instances sing!) about same-sex couples, poverty-stricken masses, capitalism, royalty, feminism and parenthood. 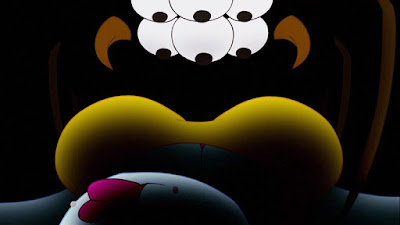 Blending punk-rock-drag-queen-cabaret musical (no joke!) with black comedy, social + romantic drama, adult animation, trippy fantasy and body horror (in the icky-turned-happy finale), this anarchic (or rather, arachnic) extravaganza earns a lot of points for originality. Now, how many LGBT films that can simultaneously fit all of the abovementioned genres have you seen? The answer is, probably, none. The helmer wears his many influences, from John Waters to Dario Argento, on his sleeve or, more literally, in the form of movie posters and puppets crafted by his sister Rahel who's also credited as a starring actress, producer, as well as a make-up and special effects artisan. 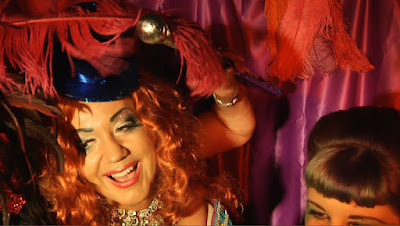 Speaking of Ms Kapsaski, I can not help but mention her cute foreign accent that often compensates for her (deliberately?) 'naive' acting. She plays Matilda, a struggling sex worker at a sleazy nightclub/burlesque 'Juicy Girls' who lives with her unemployed, happy-go-lucky lover Eden (a striking physical presence by performance artist Sophia Disgrace) in a rented house. Faced with a demanding landlord and the constant lack of money, each of the girls has her own problems to deal with, such as (SPOILER ALERT!) a certain intrusive customer who could be a homicidal maniac with a phallic drill-extension or a disobedient pet spider with the rapist's intentions (THE END OF SPOILER). 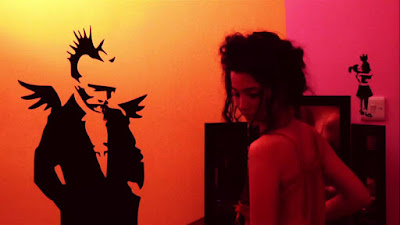 Bathed in the shades of over-saturated red, blue, pink, yellow and violet, their queer and quirky world is pretty similar to our own, though it's a tad more absurd, with The Tentacle Master (hentai mangaka Toshio Maeda) and The Fairy Godmother (Lynn Ruth Miller) appearing at will and, in the case of the latter, delivering the second-best (comical) line next to the one regarding the Easter Bunny and Watership Down. The animated, cost-effective sequences add an extra oomph to the low-brow aesthetics, whereby the songs by Jeff Kristian and the one by Lee Mark Jones (aka Gypsy Lee Pistolero who portrays the character named Ticks) are not only campy and catchy, but also imbued with hot irony.

However, Spidarlings is by no means a perfect film, nor does it try to be, so it falters in places due to its hefty length, uneven performances and pacing issues, especially during the 'speaking parts'. On the other hand, there's a great, almost certain possibility it will find a cult status in the future.
Објавио Nikola Gocić у 11:09 AM