"Wabi-sabi is an intuitive appreciation of a transient beauty in the physical world that reflects the irreversible flow of life in the spiritual world." (Andrew Juniper)

Speaking from personal experience, graphical glitch is one of the last things I want to encounter when playing a video game. However, art is a different story, because in the skillful hands, glitching image can be a powerful tool. The proof for this statement is to be found in Poem for Loa - a piece of "digital wabi sabi", in the words of Rakuš herself.

Boldly embracing the philosophy of imperfection and impermanence, the author presents us with a cheetah who runs across savanna most probably in an attempt to catch another animal that comes next below it in a food chain. However, the beast's action is the least important aspect of this unique "glitch poem" which also takes inspiration from the Haitian proverb: "Great Gods cannot ride little horses."

What matters is a mysterious, unfathomable force that drives the artist to take the simplest of wildlife scenes (each one of us has seen in some nature documentary, such as The World of Survival) and dissolve it in pixels, covering it in the shades of dark-blue. The process is comparable to that of a painter mixing colors or a sculptor shaping clay and the result is a meditative, haiku-esque composition "suspended between representation and abstraction". One of its fundamental qualities is the liquidity which comes as no surprise, considering Rakuš's obsession with water mirrored (no pun intended!) in Alchemy on the Amstel and Paesaggio in 9 Strokes - a loving tribute to Cy Twombly's untitled "green paintings". Accompanied by a song played backwards, it appears like a volatile leftover of a dream trapped in the hypnagogic state. 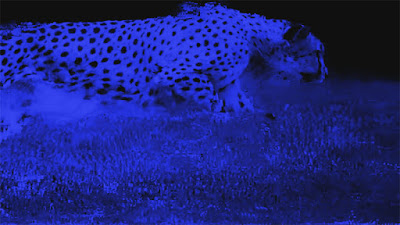