A strong contender for the most 'trans-genre' film of the year, The Whisper of the Jaguar (originally, O Sussurro do Jaguar) is, at its heart, a melancholic, punk-ish, neo-hippie road movie of the soul-undressing kind that flows like a mountain stream between queer performance, deadpan dramedy, spiritual adventure, satirical commentary, pseudo-documentary, sexual liberty and postcolonial theory, introducing its viewer to 'kambô' and 'ayahuasca' healing rituals, as well as shamanistic lesbian foursome (inter alia) via strikingly composed 'tableaux vivants' which capture all the beauty of Brazilian nature and lead to a trippy, candy-colored credits sequence you can't take your eyes off. 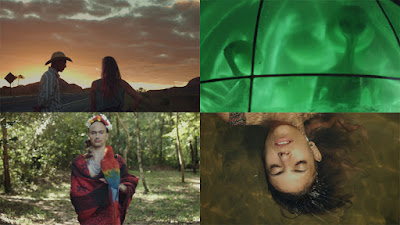 (The film plays for free on FestivalScope until the 18th of March.)
Објавио Nikola Gocić у 6:37 PM