Shane Ryan's cinema is one of brutal honesty, no compromises and raw lyricism, especially when it comes to his portraiture of social outcasts, as well as exploration of sensitive topics and dark side of human nature. In that regard, his most penetrative, yet not the best works are The Girl Who Wasn't Missing which focuses on the ramblings of a 15-yo rape victim, Echo, and My Name is 'A' by anonymous which is based on a real life murder committed by a group of mentally unstable teenage girls.

For Paper Kids - a short version of a feature in making God Got Ill and a spiritual sequel to the aforementioned films, Ryan completely eschews dialogue in favor of the music video-like imagery that is initially gentle, evocative and somewhat mystifying, only to gradually shed its skin into something grittier and more biting. (He takes the similar approach with a post-apocalyptic 80'sploitation Guerrilla.)

During the first half of this 20-minute experimental drama symbolically opening with the sunset, he utilizes on-screen 'tags' to identify his protagonists all of whom are played with unaffected simplicity by non-professional juveniles and young adolescents. Their wistful stares and idling around (streets, fairgrounds and empty beaches) reflect apathy, revolt, isolation, sadness or the mixture thereof, with the reasons for the 'sulking' becoming clearer in the second act and resolving epilogue.

Aimlessly wandering while trying to escape from the clutches of reality, the children (from the posters that no sane parent would want to see) are lovingly captured with a hand-held camera at their most vulnerable, every moment acting as a verse of an emotionally devastating poem. The tonal shifts which correspond with the chaos ruling their young, unprotected lives are marked by the changes in aural landscapes turning from soothingly ethereal into disturbingly piercing. A few instances of nudity are not intended to titillate or produce a cheap shock effect, but to emphasize the dreariness of the subjects' unenviable situation. 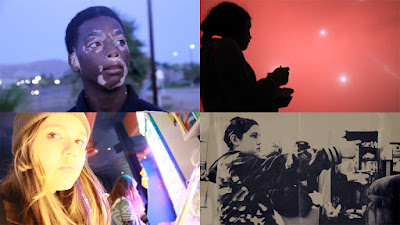 (The review is based on the screener provided by the author.)
Објавио Nikola Gocić у 1:08 PM