In Short - Films by Julian Radlmaier

I thought that it was impossible to be more relentlessly deadpan than Roy Andersson and then I got myself acquainted with Julian Radlmaier's short, yet promising opus which could be labeled as 'Buñuelian blue-collar's neo-surrealism'.

His rigid, North-Korean-society-like aesthetics do require some time to get used to, but once they click with you, you're in for some deadly serious, occasionally laughing-out-loud fun stemming from the decidedly hipsterish satirization of both communism and liberal capitalism, as well as a few other 'isms'.

Moving from the playground of discreet hilarities caused by Vladimir Mayakovski’s ranting ghost (a memorable portrayal by a Georgian poet / multi-media performer, Zurab Rtveliashvili) in A Spectre is Haunting Europe, through the black hole installed at a high-brow exhibition in A Proletarian Winter's Tale and all the way to an apple farm which serves as a starting point for a failed working class revolution (as remembered by a canine specimen) in Self-Criticism of a Bourgeois Dog, Radlmaier demonstrates a keen eye for square-format/suprematist compositions and a great sense of absurdist whimsy and self-reflexive irony, proving that birds tend to speak all sorts of utter nonsense and that St. Francis would've sucked as a modern-day laborer and politician. 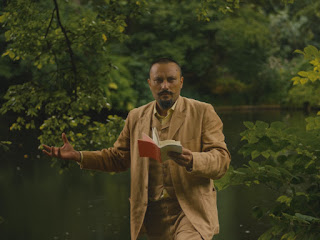 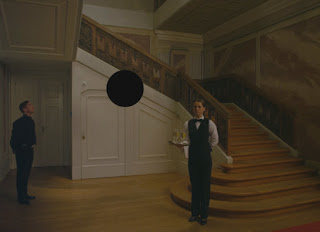 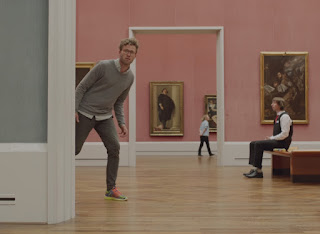