Sono's wife Megumi Kagurazaka stars as an intergalactic mailwoman (or rather, mail-gynoid), Yoko Suzuki, in a tranquilizing, deliberately paced arthouse sci-fi drama The Whispering Star (Hiso Hiso Boshi). Powered by several 1.5V AA batteries, her composed, methodical heroine is on the mission of delivering packages across the vast universe - a job that usually takes years to be accomplished.

The question that bothers her is: "Why do people cling to the old-fashioned ways after teleportation has been invented?" And the answer which she will eventually find lies in nostalgia and unpredictable human nature leading them to their demise. Now is probably a good time to mention that the (highly lyrical) story is set in the distant future when humanity is on the brink of extinction due to its own faults.

In a spaceship equipped with antique gear and shaped as a traditional Japanese house, Yoko's only company is M.I.M.E. - a computer machine 6-7 with the soft voice of a child and the appearance of a tube radio adorned with Edison bulbs. Her daily chores are, essentially, those of a diligent homemaker, but she also has a lot of spare time mostly spent listening to the audio-diaries on an analogue tape recorder.

Nothing much happens and yet, Kagurazaka commands your attention, together with the exquisite set design (kudos to Takeshi Shimizu) and post-apocalyptic-like locations of dilapidated Fukushima dubbing as the remnants of terraformed planets. With that in mind, The Whispering Star could be viewed as the soulful and solemn requiem for tsunami and nuclear disaster victims, the seaside scene being the most harrowing.

Once the film starts, you are instantly stunned by the gorgeous sepia-tinged black & white cinematography. Miike's frequent collaborator DP Hideo Yamamoto (Audition, Ichi the Killer, The Happiness of Katakuris) and Sono at his most poetic, restrained, even Tarkovskian achieve to-die-for looks in the vein of some New Wave (Nūberu bāgu) masterpiece. A single splash of color doesn't take away from the sublime beauty of this whispered, gently humorous "adventure", whereby Kagurazaka's non-pro partners add to its austere charm.

So, if you open your mind and put on your patience suit, there's a great chance you will be hypnotized by Sono's contemplative experiment. 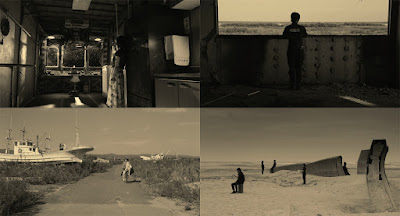