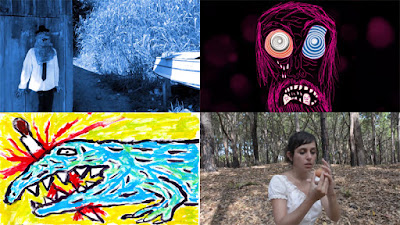 Okay, how do you even review this kind of... stuff? Maybe a piece of shoddy poetry for starters, something along the lines of:

Ducklings are cute,
magic dolphins are crimson red,
I feel like I’m gonna puke
so bad, so bad.
Or you just begin by declaring that a Kingdom of Trash Cinema has a new court jester with an utterly deranged sense of scatological humor. Well, actually, he's not so new - according to IMDb, the multidisciplinary Brazilian artist Gurcius Gewdner has made over 50 (mostly short) films, so he's obviously experienced, not to mention hyper-productive.

Also evident are the DIY masks and special effects of his latest offering whose title couldn't be more suggestive. From the very first minutes, Pazucus: Island of Vomit and Despair (originally, Pazúcus: A Ilha do Desarrego) wants you to know that it's a trash and that it is proud of being a potentially cult-worthy trash and that you can trash it to your heart's content, but it will always remain a fucking trash.
A 'little bit' overlong and unapologetically sordid exercise in bad taste, it makes Troma productions look lavish and glossy in comparison. To call it non-conformist or to say that it doesn't take itself seriously at all would be a severe understatement. Opening with arguably the most bizarre shoe polishing scene (blended with a loving homage to Shuji Terayama) ever brought to the screen, this weird, bonkers, delusional fantasy is an almost incessant assault on senses.

From the sultry orgies of Fukui-inspired crying and screaming, vomiting in all colors possible, excrements slowly coming to life and surprisingly delightful child-like paintings that serve as a glue in certain sequences (ha, totally unexpected), three (or so) storylines emerge and eventually converge into one absurd and irreverent whole.
Turds plot the apocalypse, while their 'host' Carlos (Marcel Mars) suffers nasty constipation and is hunted by his insane psychiatrist Dr Roberto (Mars, again) who has suggested a camping therapy to a couple of lovebirds, Oréstia (Priscilla Menezes) & Omar (Gewdner himself), whose sojourn in nature turns into a field day in hell. Somewhere down the drain (no pun intended?), the Goddess of Feces (Ligia Marina, baring her all) awakens and it's not because of the youth's wild party on the beach and costume ball in the forest...

Aside from the guerilla-style parts shot in the streets rife with confused passers-by, there's 'little relation to reality' here, as Mike Haberfelner of (re)Search My Trash notes. Everything goes ridiculously overboard and it's so purposely, insolently and hilariously bad, that it's, to a certain extent, poisonously and disgustingly good. There's a lot of passion and playfulness in Gewdner's dirty shenanigans, 'Zulawskian' excesses, sleazy 'anti-art' aesthetics, the lowest of the low-budget props and oddly inappropriate, yet comical juxtapositions involving jovial 80s tunes. Besides, who would have thought a plastic doll can be utilized as a handkerchief? Oh, and those cockatoos are adorable. 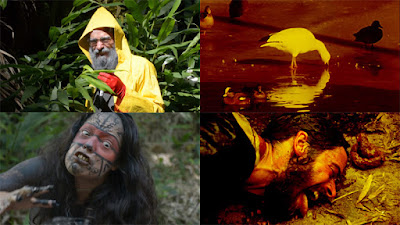