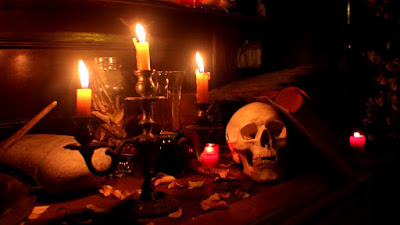 In 2012, Clara Pais and Daniel Fawcett create Savage Witches - an odd, mischievous, somewhat esoteric 'adventure' of two girls, Gretchen and Margarita, who can be interpreted as their 'wild and free' alter egos. Utilizing various techniques and nonchalantly breaking the fourth wall, they provide a fascinating insight into the history of experimental film and 'write' the heartfelt love letter to Věra Chytilová's Daises. It marks the beginning of their 'motion picture exploration'.

Judging by their latest features, a delightfully trippy phantasmagoria In Search of the Exile and a stunning 'performative' fantasy The Kingdom of Shadows (to be discussed hereinafter), they tirelessly continue to explore and encourage you to dive with them into the furthest depths of the collective unconscious, for the most exotic gems and pearls are hidden there. If you submit to their magic and open your mind, you're in for a unique experience. 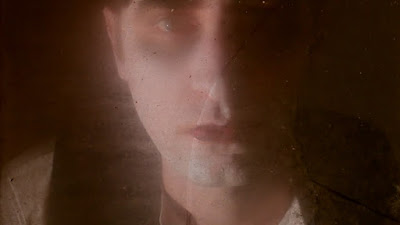 Described as 'a surrealist vision inspired by dreams, biblical myths, alchemy and family history' in the words of the directorial duo, The Kingdom of Shadows welcomes you in from the very first shot of an irregularly shaped, unidentified object swirling in pitch-black dark. As it soon turns out, this 'object' is composed of two naked, dirt-covered bodies who come to life in what looks like an iconoclastic take on the genesis of Adam and Eve.

And then, one visually eloquent composition after another, we witness two wise, silent and talented alchemists at work, or three, including Kay Fi'ain whose enigmatic character with golden hands is referred to as The Alchemist. Virtually every shot they conjure up is worthy of being framed and hung on the wall in a gallery. The immense power of the associative imagery is emphasized by the sublime score of the elaborate sounds, intoxicating instrumentals and haunting vocalizations which oscillate between gothic and classical music, ethereal oriental folk, Lynch/Badalamenti-esque jazz and Meredith Monk-like sorcery. 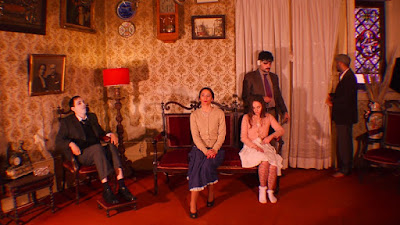 Emerging from the synthesis thereof is a puzzling, dialogue-free 'story' of love and desire, fratricide and guilt, familial secrets and the exiled ones whom the auteurs empathize with. Although the lyrical, oneiric narrative and the protagonists - ciphers and archetypes - seem to be of secondary importance, Fawcett and Pais are in complete control over both aspects.

They get pretty intense performances from the entire non-pro cast, especially from Carina de Matos who brings 'agitated elegance' as Mother, Rouzbeh Rashidi as the dandy, subtly comical Inspector in a 'cosmic vest' and Fabrizio Federico as tormented, mime-faced Cain. Also admirable are the Portuguese dancers Joana Castro and Bruno Senune who bear their all to play Eve and Adam, respectively, and frequently move like being choreographed by the ghost of Pina Bausch. 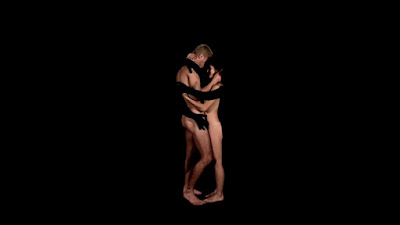 Which brings us back to Fi'ain's Alchemist who operates as a mystical force behind the strange, meticulously staged events, from his (or her?) candle-lit laboratory that is the first and the last 'set' we see. The old house where his/her 'puppets' are gathered once belonged to Ms Pais's grandma and it is a charming place (in Portugal) replete with stylish furniture and flamboyant decor, yet surrounded with eerie aura. Equally impressive are the craggy cliffs of Serra de Arouca where we find Cain wandering. Not to mention that each location is beautifully captured by the cinematographers (this is a low-budget film, so you can only guess once who they are).

The Kingdom of Shadows is like an enlightening dream you volunteer to get lost in forever, holding the Truth by her hand. So, in the name of Daniel and Clara and the holy essence of avant-garde cinema, amen! 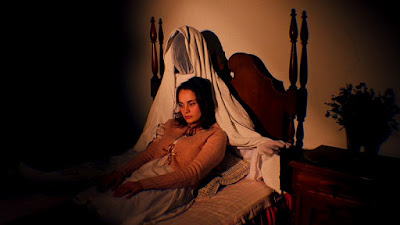