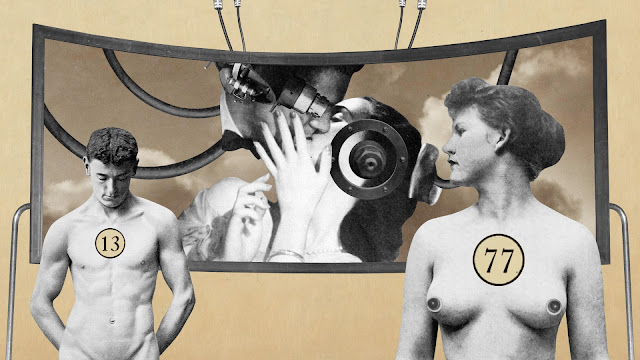 Short collage film or rather, 'motion picture book' LOS is the second collaborative effort between NYC-based artist Martin Del Carpio (concept and direction) and myself (collage art and animation), with the ambient/minimalist score provided by Lebanese improvising guitarist Sharif Sehnaoui. It blends a sci-fi narrative and cut-out/stop-motion visuals with hints of esotericism in its portrayal of the bleak, AI-dominated future.

In another time, on a different world, mankind has made progress . . . Ruled by the very AI they developed and employed to set them free, humans have become slaves to their machine. We have lost friendship, love, and sex, and we are the machine labor and means of production. In a tomorrow-land without touch or value, a future very much of our making, upon which human life is transaction and output, we have lost humanity. The AI, the machine, has put us to work, and we humans do not work without it. We labor and toil for calculations and machinations logical and unfeeling, having forgotten one another and ourselves.

Yet there are the Los: the most human of us, ostracized, exiled, and refuted by the rest for knowing nature and refusing to resist intimacy and the intangible connections of life. It is the Los who would free mankind to return to their humanity and to become again the collective “we” of individuality, of love, of freedom from artificial design. The Los will go to war for the humans who were not and for the humans they are, but . . . will they save us?