If the devil is in the detail, then a run-down appartment rented by Alexi - the protagonist of The Step (originally, Sapekhuri) - must be the residence of a whole army of little devils. There are plants in every corner, vinyl records stacked in piles, old newspapers glued to decrepit walls, bric-a-brac and trinkets wherever your eyes reach, and a huge, dust-covered travelling bag resting next to a cupboard covered with pots and pans that haven't been used in a while... On top of that, the rooms are furnished or rather, crowded with beautiful pieces of vintage furniture acting as silent and unkempt witnesses of better days. But, this micro-chaos isn't without its charms and they are recognized by both Alexi, a doctorand of botanic superbly portrayed by Merab Ninidze in a low key, and his many eccentric and/or enigmatic friends who feel at home there, frequently discovering the crib's little secrets.

From a loveless conversation between Alexi's estranged father and hissing stepmother, we learn that the young man has moved again, yet his quest for independency as well as for the place in a society seems to be at a standstill. Chained by the same old relationships deliberately depicted as opaque, and trapped in a bureaucratic loop at a research institute where he applied for a position, he resembles a Kafkaesque hero whose repetitive everyday grows increasingly surreal to the point of having a donkey as a roommate. The uneventfulness of his bizarre reality is subtly poeticized by Rekhviashvili who imbues the story with a keen sense of the absurd and spices it up with wry humor, preparing the terrain for the titular step which is supposed to lead out of the cluttered, claustrophobic spaces posing as a comfort zone. In the pivotal scene - Alexi's encounter with his favorite teacher - he suggests a comforting thought that 'one who doesn't know where he goes will get the farthest', so he lets his central character wander some more through the labyrinth of his own creation, before finally finding (what appears to be) an exit.

Just like with his previous films - The 19th Century Georgian Chronicle (1979) and The Way Home (1981) - Rekhviashvili almost completely abandons music, achieving an austere atmosphere of brooding, hypnotizing, and at times, even paralyzing stupor. Once again, he collaborates with Archil Pilipashvili behind the camera, and frames the proceedings with pictorial elegance that turns his drama into a lucid fever-dream, emphasizing the beauty of decay. 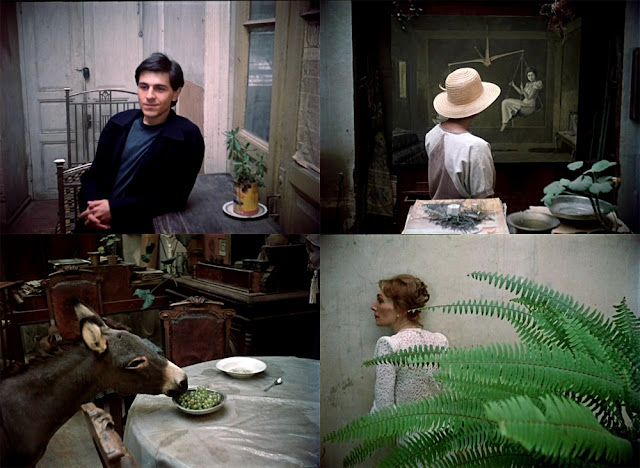