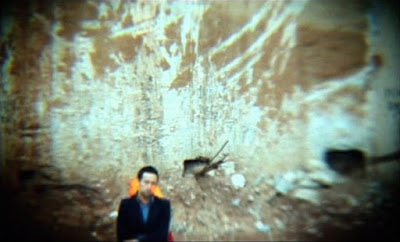 And the same also applies to cinema - one of the most beautiful lies invented by humans. Now, multimedia artist Ran Slavin may not be the greatest of liars amongst the filmmakers, but his trippy feature debut The Insomniac City Cycles (available on Vimeo, HERE) does have its merits. Operating as a dream within a dream of an unknown dreamer, this experimental, visually alluring if a bit uneven psycho-drama is high on ambition, and low-key in its presentation due to obvious budgetary constraints. 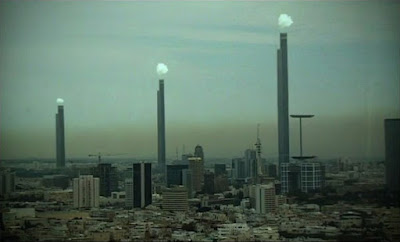 Its enigmatic, languorously paced (non)narrative is broken into two parts, the first of which focuses on a man who seems to be stuck in a limbo of sorts after killing someone or being murdered himself. We see him lost in an empty parking lot and burning (!) between the decrepit walls, and occasionally hear him ruminating on his inescapable situation. His crumbling mental state is reflected on the city of Tel Aviv that becomes one with him, while gradually metamorphosing into a futuristic metropolis through subtle digital interventions. It turns out that he's only a part of 'an imaginary scenario' dreamed by a woman with a dragon tattoo on her back who wakes up in a hotel room somewhere in Shanghai. Her telephone conversation with a deep-voiced stranger calling from a noisy pet shop reveals that she has ordered her own murder, and is waiting to be executed by a dandy assassin... or his dancing counterpart wearing a baggy mask. 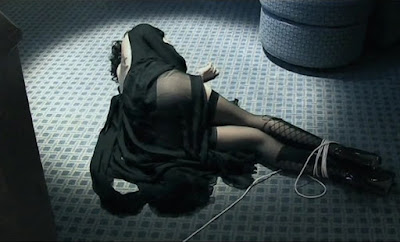 A brooding, conceptual urban nightmare is one way to describe Slavin's heavily fragmented mystery that wears its Lynchian influences on its sleeve, and is way too infatuated with lengthy city montages that often serve as fillers, especially during the Shanghai chapter, rather than important pieces of the puzzle or symbolic representations of one's mindscape. Open to various interpretations, it is comparable to a slow, break-up dance between Eros and Tanatos, with the latter leading, and establishing a funereal atmosphere in which the characters - everyone a cipher on their own - wallow. Defined by despair, their overwhelming inertness is accentuated by dim-lit surroundings that hold their souls in captivity, as well as by gloomy music score composed by the author himself, with the witty, Badalamenti-esque jazz song on love and death providing a strange catharsis in the epilogue. 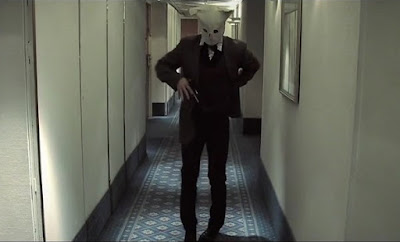