Reza Abdoh (1963-1995) was an American theatre director, poet and playwright of Iranian descent known for avant-garde productions that are often described as confrontational and difficult to digest - 'a visual and aural and spiritual assault' in the words of Bidoun editor Negar Azimi. A self-proclaimed member of a TV generation, he 'voraciously incorporated varied references to music videos, variety shows, film, dance, classical texts, and BDSM into his work, with equal parts poetry and rigor' (from Rage against the Machine: The Theatrical Whirlwinds of Reza Abdoh by Krist Gruijthuijsen). However, his first and only feature takes a different approach to channeling anger that was partly caused by his exile to the USA, and not to mention the terminal disease (AIDS) he was diagnosed with.

The Blind Owl revolves around Ricky (Peter Jacobs) - an 18-year-old adolescent tending of his ill mother Anna (Paulina Sahagun-Macias) in their small LA apartment, and earning his daily bread (or rather, milk) as a prostitute, caregiver and delivery boy. His story which plays out like a quasi-social realist / coming-of-age drama peppered with the elements of wry humor and light surrealism is shaped through interactions or, as Daniel Mufson notes, 'intersections' with a wide array of slightly bizarre characters, involving a mysterious friend with a weird hairdo, Trenn (Tom Pearl), and a blind man (Anthony Torn) who is occasionally assisted by Ricky. They all inhabit a sort of a demi-monde in which an estranged father oblivious of his son's 'exploits' is just as freaky as a diabetic bisexual mortician with strange fetishes. The closest thing to father figure that the young protagonist has is a pimp-like sadist who earns comparisons to Blue Velvet's Frank.

Void of intimacy, save for a few moments of tenderness such as a slow dance with Trenn or a bath scene with the dying mother, Ricky's life is marked by failure, coldness and indifference, appearing almost like the equivalent of a Joy Division song. Its bleakness - defining of the film's numb and stifling atmosphere - is heightened by the sparseness of dialogue, deadpan performances, and the overwhelming meaninglessness of action. Even the folk songs that interrupt the narrative and act as the reminders of Anna and Ricky's ethnic background are emotionally drained, so the only relief a viewer gets is a drag queen lip-syncing to a ballad in Spanish, while Ricky's playing Street Fighter II on the arcade machine. Although inconsequential to the plot, this sequence adds a lot to the theme of cultural clash that the helmer subtly interweaves into his exploration of despair and alienation. There's raw beauty in the way he portrays the marginalized and desensitized ones, its abrasiveness reflected in the low key imagery that marries controlled theatricality to cinematic idiosyncrasy, and its peculiar relation to both diegetic ambience and the eclectic music ranging from gloomy jazzy tunes to energetic alt rock. It's a shame we will never know how the filmmaking career of Reza Abdoh would have evolved... 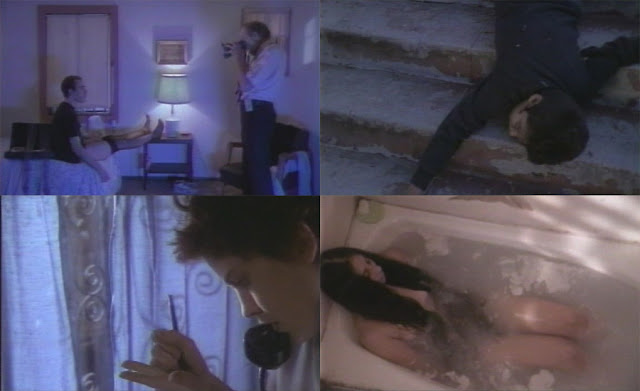