Lately, I've been keen on exploring Soviet-era animation which is how I've come upon Tarasov's 10-minute sci-fi short Contract. Based on the story Company Store (1958) by Robert Silverberg, this delightfully odd piece of the 80s psychedelia focuses on an unnamed colonist (voiced by Aleksandr Kaydanovskiy of the Stalker fame!) whom we meet zapping giant monsters with his laser gun on an uninhibited planet. It turns out the creatures (and the suddenly appeared protective field) are but a sneaky ploy of a trading robot, QBF-41, so our hero tries to chase him away... but all in vain, because the little guy (whose body is shaped like a vintage cash register, btw) is pretty persistent on selling goods. However, QBF-41 is the least of our hero's problems...

A witty stab at capitalism, Contract (originally, Контракт) is packed with a healthy dose of wonderful visuals, considering its limited time frame. Similar to one of Tarasov's earlier offerings, Mirror of Time (Зеркало времени, 1976), the design of human characters is pseudo-realistic, with its high contrast shading and bold color palette of matted reds and oranges getting all the images easily burned into one's mind. What makes them even more impressive are the light touches of surrealism, especially during the epilogue which is aurally laced with the recording of I Can't Give You Anything but Love, Baby performed by Ella Fitzgerald in 'Louis Armstrong impersonation' key. 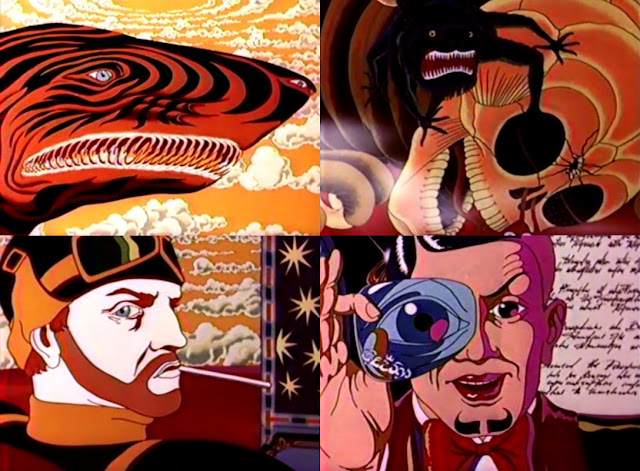