The stuff that our wildest dreams are made of gets disintegrated, then crystallized into a strange, luminous matter, and finally filtered through whatever lies inside a black hole, to be assimilated into The Flying Fish. The question arises: What is the titular creature? Is it the embodiment of an eternal, restless spirit? A lost thought of some supreme entity? Or could it be the essence of an alternate, unparalleled universe about to be born? Whatever the answer may be, Sayginer's sublime, highly mysterious or rather, mystical fantasy pierces one's soul and gradually melts, creating a protective velum around it.

Thoughtfully composed of ten (very) short films created over the period of several years, The Flying Fish is not a simple sum of its parts, but a fusion of the highest order; a singular vision that burrows deep in the collective subconscious and plants the seed of the Great Unknown. Following its puzzling inner logic of blurred dichotomies and meta-mythological thought, it plunges you into an infinite, continuously mutating world, both compelling and somewhat frightening in its open-minded amalgamation of the mental, the physical, the virtual and the transcendental. During an uninterrupted series of neo- or cyber-alchemical processes, we witness, inter alia, the metamorphosis of a solid sphere into a liquid micro-universe, the birth of a brand new constellation preceding a psychedelic delirium, skeletons performing a ritualistic dance around an ominously looking deer-goddess, and a tower (silo?) of enigmatic hooded figures observing Ascension from their cryogenic capsule-like cages!

And somehow, one feels and intuitively knows that everything makes perfect sense - the abscence of words (for the most of the film's running time), the idiosyncratic utilization of glossy, hyper-stylized CGI, as well as the occasional pokes at contemporary society in an otherwise poetic, esoteric, symbolically charged narrative which crescendos in astonishing scenes of a neonized afterlife underscored by a pulsating synth music. 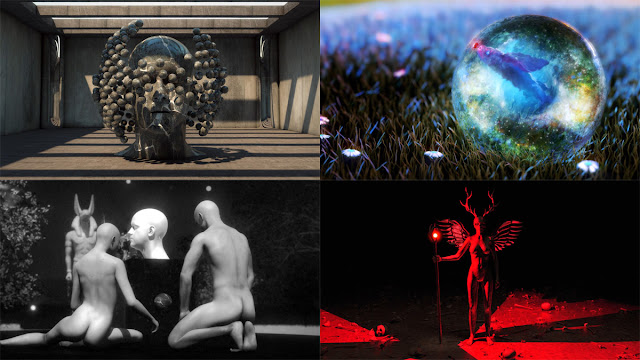 (This review is based on the private screener provided by the author.)
Објавио Nikola Gocić у 10:28 PM