Czech cinema has a long tradition of stop-motion animation, Jan Švankmajer being one of its most revered representatives, and the latest feature from Jan Balej (One Night in a City) appears as its logical continuation. Quite similarly to the abovementioned auteur's oeuvre, it is decidedly an adult affair which treats its source material with an extra dose of grittiness and bleakness, as it simultaneously strives to keep the original message(s) intact.

An adaptation of Hans Christian Andersen's signature fairy tale, Little from the Fish Shop (originally, Malá z rybárny) comes with a modern twist co-written by Balej and Ivan Arsenyev who refrain from sugar-coating and opt for the exact opposite approach. It opens on an ecological note, along the first of very few instances of computer generated imagery, introducing us to the once wonderful ocean depths now polluted by the land-dwellers' toxic waste. The royal merfolk family - a disabled mater familias, her son, the king, and his three daughters - are forced to move into the nearest port town and conform to the new lifestyle, their exile accompanied by a fish orchestra's solemn performance.

In a "drastically macabre betrayal of their natural environment", as Guy Lodge notes in his Variety review, they start a fish-selling business in one of the harbor's seediest districts, their shop surrounded by night clubs and frequented by men of loose moral. One of them is a cocaine-dealing waiter whose face is a physiognomic equivalent of The Cabinet of Dr. Caligari sets, and the other is Bogan - a smutty brothel owner whose disheveled Don Juan-esque looks and appreciation for techno beats make him a charmless prince stand-in, yet somehow act as a bait for the Sea King's youngest child simply referred to as Little.

The 'love is blind' phrase pretty much applies to Little's infatuation, though it could be her naiveté and childlike curiosity that lead her down to the tragic denouement. After all, her knowledge of the outside world is limited to fancy re-interpretations of her older sisters' stories and she is not allowed to leave the confines of their store until after her sixteenth birthday. Now, despite the fact that she and the last of her kin have adjusted their tails for walking the mean streets, our heroine still has to make a sacrifice, because Bogan finds legs more to his liking. Thankfully, there's a witch in the sewers ready to make a magic concoction in exchange for a pearl and 'hair extensions', because voice-selling would be unbefitting of this dialogue-free rendition...

Under the surface (no pun intended) which clearly reflects some of the contemporary social issues, such as immigration and the (unjust) treatment of women, Balej's narrative remains fairly faithful to that of Andersen's, eschewing the spiritual, Kingdom-of-God dimension of Little Mermaid's death in favor of a more down-to-earth conclusion. "No matter how far, how stormy the ocean, chase your dreams, risk it all." - in his wise old man tone, eventually advises the narrator (Oldrich Kaiser) whose soothing and resonating voice brings John Hurt's performance in The Storyteller to one's mind.

Where Little... shines the brightest is the delightfully grotesque design of its unique world brimming with life, albeit a suffocating one as the depressing palette of desaturated colors superbly conveys. A great attention to details is paid in both the construction of scenery, and the creation of puppets who are often given fish-like features in correspondence with the central character's origin. Their pale complexion and dark circles around their eyes are almost certainly caused by the smoggy air of the imaginary town they live in - on several occasions, we can see a forest of factory chimneys towering in the background. A couple of extra layers of vividness are provided by grungy, tangible textures, and the whimsical, eclectic score by French musician Chapelier Fou (also credited under his alias Louis Warynski). 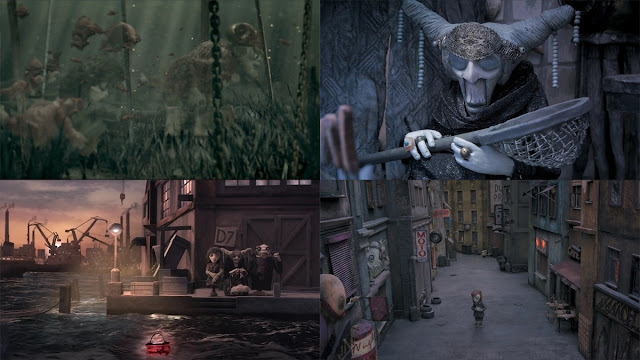