☼☼☼☼☼☼☼(☼) out of 10☼
Aesthetically astute, deliberately incoherent, thematically ambiguous, unapologetically whimsical, and sparsely sprinkled with sudden bursts of violence, High Life subverts genre expectations in favor of the peculiar poetics and contemplative viewing experience. Its stubborn inaccessibility poses as a challenge rather than a disadvantage, adding to its allure, even though it tends to be slightly irritating.
Neither nihilistic, nor optimistic, this enigmatic, ambivalent sci-fi 'adventure' eschews spectacle for inner workings of its low-life characters, yet it refuses to open up much space for our sympathies, except for the hero, Monte, and his daughter, Willow. Portrayed by a weird ensemble cast, including Robert Pattinson, Mia Goth and Juliette Binoche (who boldly jumps into the uninhibited role of a 'shaman of sperm' - a witchy mad scientist striving to bring babies into the inhospitable world), the protagonists are inexperienced astronauts with criminal past on a suicide mission. As irrational as it sounds, their trip is of the 'no return' kind, but who knows - maybe a sparkle of hope can be found in a black hole they're headed to.
Imprisoned in a matchbox-shaped spacecraft with retro-futuristic / Soviet era-like interiors, they float in nothingness, their small community representing a microcosm of humanity on the verge of extinction. Speaking of their 'home' that remains highly claustrophobic, one can not help but admire Ms Denis and her cinematographer Yorick Le Saux's ability to make it constantly attractive, only through subtle changes of lighting or camera angle. Broodingly beautiful visuals are discretely matched with humming, somewhat ominous score by Stuart A. Staples, creating the dense atmosphere of a heavy dream. 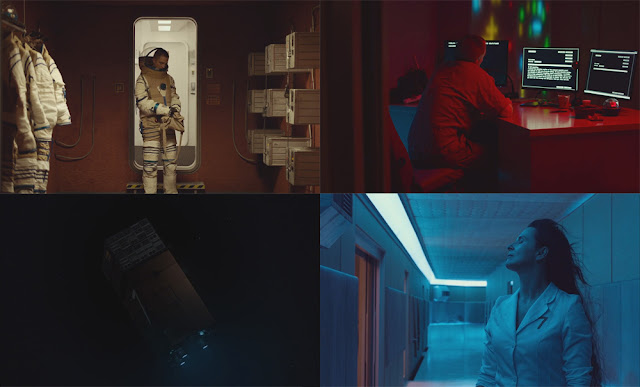