Please Speak Continuously and Describe Your Experiences as They Come to You (Brandon Cronenberg, 2019)

Firmly standing head and shoulders above Brandon Cronenberg's feature debut Antiviral, Please Speak Continuously and Describe Your Experiences as They Come to You (what a mouthful title!) takes a simple premise (of a young woman experimented on in a psychiatric facility) and turns it into both aurally and visually resplendent nightmare which effortlessly burns itself into your memory and crawls under your skin, to make you uneasy. Gorgeously shot by none other than the Canadian enfant terrible Karim Hussain, meticulously edited by James Vandewater and drenched in hypnotically sinister droning of Raw's composer Jim Williams, this puzzling, unnerving and extremely stylish sci-fi body horror appears as a missing link between papa Cronenberg's early works and Panos Cosmatos's lurid fever dream Beyond the Black Rainbow. Art direction by Lori Atik (whose résumé includes another 9-minute short with a long title - Scarlet or: A Postmodernist Deconstruction of Young Love Under the Corpocracy of Late-Capitalism) is immaculate and practical SFX by Chris Nash add to the film's decidedly retro vibe. BC's tight, fetishistic direction makes this small, yet highly memorable piece of cinema an absolute must-see, and you can catch it (for free!) on Festival Scope until the 2nd of June. 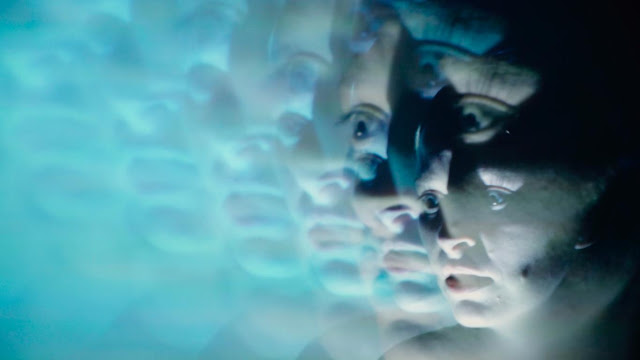