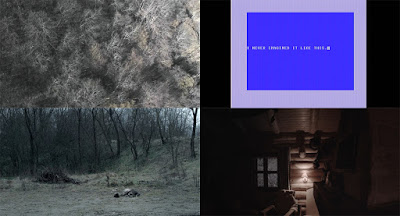 And the presence of the unknown is sensed all throughout the feature-length debut for the Hungarian experimental filmmaker Péter Lichter. Opening with an arresting bird-view of frost-covered trees, Frozen May (Fagyott május) plunges the viewer into the hopeless, almost lifeless world of the alternative past.

Set in 1990, after the fall (of an UFO? human kind? a supreme being?), it puts you into the shoes of an unnamed protagonist who struggles to survive in a hostile (post-apocalyptic?) environment. He lives alone in a lodge and roams the woods in attempts to find another human being. After spotting a mysterious child near an abandoned summer camp, his quest leads him to a ramshackle villa. There, he begins writing the notes to his sister Anna on the fortunately discovered Commodore 64.

"It's a miracle this computer is working." - he remarks at one point, fully aware that his message probably won't reach the addressee. From his 'diary logs' rendered in a boxy and 'glitchy' 4:3 format, we learn about this man's aspirations and unenviable circumstances which cast a shadow of doubt over the said chance encounter. For all we know, it could be a mirage or the ghost of his former self that he chases after, whereby the obscured, non-linear and unconventional narrative leaves many of its questions in the dark.

A thick, impenetrable mystery and the non-specific, yet constant and intense feeling of dread are maintained by the long takes (mostly from the first-person perspective) complemented by the brooding ambient score. As the composer Ádám Márton Horváth and the sound designer Péter Benjamin Lukács 'breathe' as one, Lichter and his DoP Dávid Gerencsér realize the 'ominous potential' of a winter forest - a (grim) character on its own - to the maximum extent possible. Not to mention a great lesson in how to operate a handheld camera without inducing a headache, let alone dizziness.

In the series of beautifully framed widescreen shots of cold light and drained colors, we are introduced to many (all frowning) faces of the foreboding locale whose chilling atmosphere is further intensified by the deathlike stillness. The aforementioned C64 'intrusions', as well as the home-video footage which embodies our unseen hero's memories provide rare moments of relief and warmth in a devastating stream of depressing images. All the while, the unknown keeps the status of the unsettling factor, sending shivers down your spine.

But, what is the meaning of the whole proceedings? Considering the year in which the film takes place and which is also one of the turning points in Hungarian history, there has to be a social commentary hidden in this bold, patience-testing subversion of the 'cabin' subgenre... 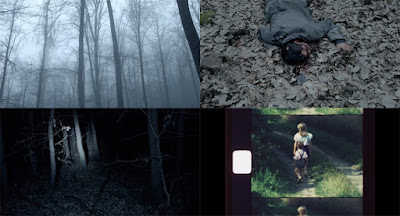