Reportedly an expansion of Bazelyan & Parajanov's graduate film, Andriesh (Андриеш) is a typical product of its time and an early evidence of the famed director's interest in ethnography. Based on a Moldavian fairy tale (which also happens to be the title of the aforementioned student opus) by Yemelian Bukov, it follows a young, fearless shepherd Andriesh who embarks on a perilous journey to save his flock and faithful dog, Luthar, from an evil wizard, Black Hurricane.

Armed only with a magic flute given to him by people's hero Voinovan whose beloved Liana has been taken away as well, the boy is offered assistance by a weeping willow, a jester called Pakala, a tree-ripping giant, a talking river and a haiduk turned into an oak (and a suffering one at that). Filled with archetypal characters, the simple, linear story takes familiar turns until the very epilogue with a 'petrifying twist', and it feels antiquated, yet charming in its naivety. The same goes for the tight budget special effects and weirdly lit studio sets, still magical in their obvious artificiality - there's something purely cinematic about them that no CGI can match. A few scenes shot on location, including the pastoral prologue, entice the viewer with their highly poetic qualities, so the transition to the 'fake' steppe, forest and cave can be a bit jarring.

However, the overall visual package remains pretty pleasing, especially considering that the cinematographers, Suren Shakhbazyan and Vadim Vereshchak, were as inexperienced as the directorial duo back then. It can't be compared to Parajanov's best looking 'tableaux vivants', but it's certainly not something to be ashamed of. Accompanied by the sweeping, extremely melodramatic score by the first-timers Igor Shamo and G. Tirceu, both the folkloric and fantastical imagery leaves the lasting impression. Even more commendable are the performances by the cast of newcomers, with Robert Vizirenko-Klyavin serving plenty of unforgettable penetrating gazes as Black Hurricane. 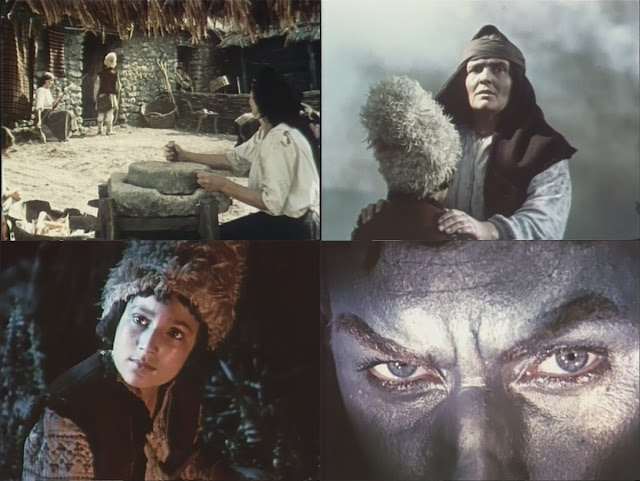