By courtesy of the Hungarian filmmaker Péter Lichter (Frozen May), I present to you his sophomore feature co-directed by Bori Máté and earmarked for a 2018 release. A glimpse into the future which sort of clings to the past...

Described as 'a psychedelic retelling' of what is usually considered to be Shakespeare's greatest play, The Rub unfolds 'within the mind of the protagonist'. However, in spite of the fact, a quote from Don Siegel's Invasion of the Body Snatchers is the last thing you'd expect to see in the opening epigraph (the same goes for Stalone and Schwarzenegger).

Or maybe it isn't? It has been approximately two decades since I read Hamlet, so I can't say for sure whether the 'Bard of Avon' is turning in his grave or his spirit applauds or does whatever the spirits do as a sign of approval. But, what I can say is that I don't recall a bolder and more revolutionary rendition of the well-known tragedy.

Minimalist in terms of the cast, considering it stars only Szabolcs Hajdu as the voice of the royal Dane, The Rub compensates the lack of characters in the traditional sense of the word with its experimental visuals. It utilizes hand painted celluloid strips of various films, from The Tales of Hoffman to Terminator 3 to Melancholia, which erode and decompose before your eyes, establishing simultaneously trippy and contemplative atmosphere.

Technique-wise, it is a natural progression from Lichter's short films, such as Look Inside the Ghost Machine (2012), No Signal Detected (2013) or Pure Virtual Function (2015). And it looks absolutely fantastic or rather phantasmic, with its erratic, aggressive textures pulsating to hypnotizing effect, complemented by the brooding low-key monologues and miasmic soundscapes (kudos to Ádám Márton Horváth).

The intrusion of a few lo-fi (VHS?) sequences shot in an empty movie theater and its projection booth add a hint of nostalgia to the 'abstract proceedings' that seem to capture the echoes from the other side. The theme of transience is the main course or everything is just a dissolving dream which is but a shadow. 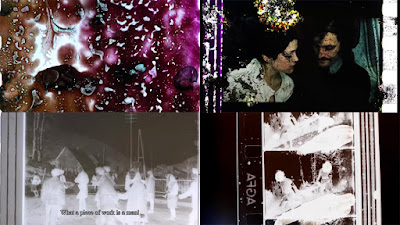