☼☼☼☼☼☼☼☼☼ out of 10☼
Described as 'artefacts of psychic transmissions captured on videotape', the latest short venture by the British-Portuguese directorial duo of Daniel Fawcett and Clara Pais is a strange little beast. Set in 1984, it depicts the aftermath of a bizarre scientific experiment that involves chickens, reptilian and human subjects, two of whom have survived and are portrayed by the authors themselves.

And not only set, but looking and sounding or, simply put, feeling as if it was created in the 80s and just recently unearthed from someone's basement or garage, this fine piece of lo-fi sci-fi channels the spirit of Jane Arden (in her Anti-Clock element) and is as radical as Cronenberg's early features (Stereo and Crimes of the Future) when compared to genre offerings we get these days. However, it is more than a sum of its cinematic influences, given that it packs quite a bit of idiosyncrasies in its brief 8 minutes.

Rather than telling the story, Fawcett and Pais opt for a wild (and not to mention weird!) sensory experience which they achieve through the sublime blend of grainy VHS visuals and pulsating retro electronica. The film opens with a voice-over narration followed by a hypnotic, hyper-stylized title that emerges from the net of hexagons, leading us to a series of dialogue-free, stream-of-altered-consciousness vignettes.

Initially adorned with broken cassette glitches, the evocative imagery gradually becomes bolder and trippier, whereby the music transforms from pounding to atmospheric, keeping you in the state of inspiring bewilderment. A wonderful treat for all the daydreamers. 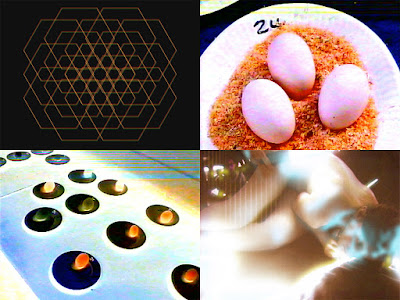