The viewers unfamiliar with Hirohiko Araki's long-running manga JoJo's Bizarre Adventure or its many anime and video game incarnations are most likely to get lost in its first live-action adaptation, but the fans of Takashi Miike's prolific oeuvre will find at least a little something for themselves in his latest offering - an off-kilter, visually attractive blend of cool (and often violent) action, twisted humor, puzzling fantasy and contrived melodrama replete with the (decently portrayed) characters sporting the weirdest of hairdos and possessing the oddest of powers called 'Stands', from a carnivorous water 'parasite' (Aqua Necklace) to miniature toy soldiers in full gear (Bad Company). 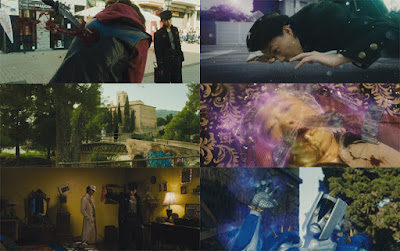