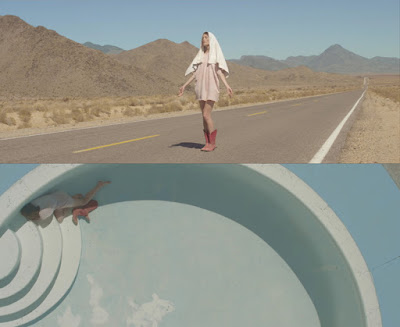 You know how the story goes. In the midst of a desert, a girl meets a boy. She sprawls herself over his old-timer's hood + windshield and he drives her off to a sleazy roadside motel. However, he spends the night in his car, while she seems to experience an immaculate conception in the bathtub, before she is attacked and gang-raped by the nightmarish Village People copycats (policeman, lifeguard, giant, priest, banker, cowboy and soldier). The next morning, the couple gets back on track and heads for Las Vegas, because that's where she wants to go...

The girl in question is the titular Ma, the 21st century Virgin Mary (Celia Rowlson-Hall), whereby the boy is credited as Daniel (Andrew Pastides), though he could be named Joseph too. And their tale which is told or rather shown without a single uttered word (apart from a high-pitched solmization and Amazing Grace rendition towards the epilogue) is a surreal, feminist, iconoclastic re-imagination of a biblical myth that will surely leave you scratching your head more than once. It begins like a romantic road movie, only to grow increasingly dreamlike, with sand pouring from a painting, a faucet and a pregnant woman's belly. 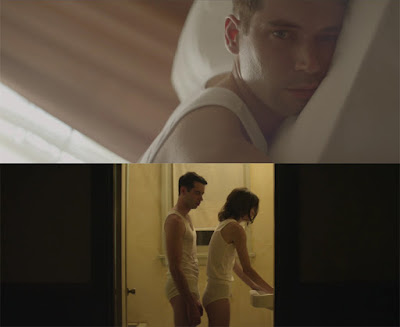 Ma is a daring and enticing feature debut for an award-winning dancer, choreographer and filmmaker, Celia Rowlson-Hall, who prefers intuition to logic, which is why her offering feels highly personal, to the point of self-indulgent idiosyncrasy. She utilizes body language to great symbolic effect, communicating her occasionally opaque ideas through stylized movements that turn certain scenes into modern dance performances akin to those of the late Pina Bausch. Her enigmatic heroine's slow-burn pilgrimage may be viewed not only as a post-Annunciation allegory, but also as a comment on societal pressures (involving the subversion of gender roles), as well as an 'inward journey' - a personal exploration that often 'alternates between total confusion, un-knowing and a sense of revelation', to quote one of the principles from the Underground Film Studio's manifesto.

But, make no mistake, Ma does not take itself too seriously as some of the reviewers suggest - there is an unexpected, brilliantly goofy comic relief sequence around the film's mid-section in which Daniel courts Ma by way of gorilla imitation and blindman's buff game. That moment of inner child awakening elevates the two characters above the brooding archetypes, but also tricks you into thinking there's hope for them in a loveless world. The illusion is broken once the abovementioned seven stalkers (sins?) return, forcing Ma to challenge herself, retaliate and reach the final destination on her own.

There's no doubt this experiment is an acquired taste, but there's even less doubt about its admirable technical values, with Ian Bloom's milky cinematography keeping you hooked onto the screen and establishing the floaty, oneiric atmosphere. The 'mute' proceedings propelled by angst and melancholy are captured in elegantly framed widescreen and accompanied by Brian McOmber's sublimely haunting score, as a physical world becomes the reflection of a soul. 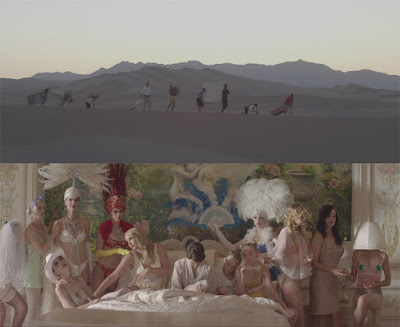 (The film is available at Vimeo on Demand.)
Објавио Nikola Gocić у 5:17 PM