☼☼☼☼☼☼☼(☼) out of 10☼ / ☼☼☼☼☼☼☼☼(☼) out of 10☼
This year, Masaaki Yuasa of Mind Games fame has been quite busy, delivering not one, but two theatrical features, which is an extreme rarity by the Japanimation standards – not even Miyazaki has managed to pull that off during his decades-long career. Both films are produced in his recently founded studio Science Saru and both are fine displays of their author's wild energy and 'flat' style.

Compared to the rest of Yuasa's oeuvre which includes masterworks such as Kaiba and Kemonozume, Lu over the Wall (originally, Yoake Tsugeru Lu no Uta) appears as more restrained and conventional, which should come as no surprise, considering it's targeted towards wider audience. However, that doesn't stop the animators from often taking a free-form route, turning plenty of sequences into larger-than-life events, especially during the prolonged, yet exciting final act.

By virtue of their efforts, a lovely coming-of-age or rather 'boy meets singing and dancing ningyo' story becomes a full-blown spectacle of color and movement, replete with merfolk of various types. At one point, the titular character Lu (who goes against the Japanese legends of man-eating mermaids, disarming you with her big eyes and wide smile) releases a bunch of puppies from a shelter and transforms them into mer-woofs or woof-maid, as you please. Her dad - a huge double-tailed shark with a smoking pipe - poses as a fish-freezing inspector and later on, demonstrates the immense power of parental love when his daughter is jeopardized.

The humans of the small harbor town of Hinashi where the action is set are a motley crew of misunderstood teenagers, wealthy opportunists and nutty geezers who bring the generational gap element to the tale imbued with environmental values and life-affirming qualities. Although most of them are the (proto)types we have seen many times before, none of them feels redundant and each is written with a quirk or two and their own place in the grand scheme of things that comes with hefty doses of charm and humor. 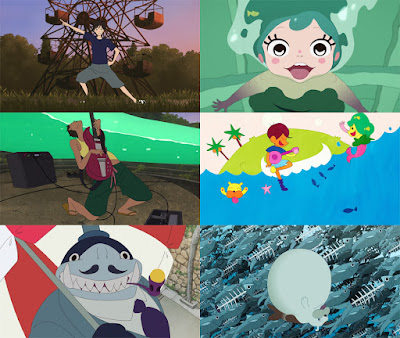 Lu over the Wall

In Night Is Short, Walk on Girl (Yoru wa Mijikashi Aruke yo Otome) - the adaptation of Tomohiko Morimi's novel of the same name, Yuasa blends absurd with romantic comedy, easily outweirding the likes of Amélie. Celebrating youth and exploring the themes of fate and coincidence, he crafts an off-kilter adventure à la Alice in Wonderland in which two narrative threads intertwine in the most off-kilter way, through the series of surreal non-sequiturs and whacky unpredictabilities.

His heroine - referred to only as Kurokami no Otome (The Girl with Black Hair) and beautifully voiced by Kana Hanazawa - embarks on a night-long journey through Kyoto, livening up every place she visits. Equipped with a liver of steel, she beats a pessimistic loan shark, Rihaku, in his own drinking game, to save a despairing carp farmer and erotic art dealer, Mr Todo, from his debts. She assists the impish God of the Used Book Market in calming the sea of used books, jumps into the lead role of a flashmob-like stage musical and nurses back to health everyone stricken by the sudden flu epidemic.

On the other hand, we have Senpai (Gen Hoshino) - a young man who is so obsessed with the Girl that he would eat an extremely hot pot to win a picture book she cherished as a child. Using methods that seem borrowed from a stalker's manual, he keeps bumping into her in order to attract her attention, getting her "Friendship Punch" in the face, his underpants stolen and an ice-cream cone sticked to his groin. And let's not forget the unrestrained Poison Berry in My Brain-esque conference which precedes the final encounter with the subject of his desire.

But, hold on, as the eccentricities don't end with her triumphs and his failures - the anime brims with snappy dialogue, droll minor characters, kaleidoscopic textures, cultural idiosyncrasies and DayGlo hallucinations that provide you with a psychedelic experience. Whimsical, irrational, rambunctious, highly imaginative and all sorts of raining apples crazy, this twisted extravaganza never cease to amaze its bedazzled viewer.
Once again... pardon, twice again, Yuasa demonstrates his prowess in the art of (flexible) animation and leaves you eagerly anticipating his next offering. 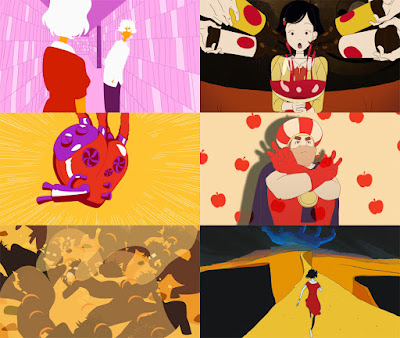