The Killing of a Sacred Deer (Yorghos Lanthimos, 2017)

Five reasons why you should watch The Killing of a Sacred Deer and ignore Mother! (yeah, it's like comparing a refreshing, orange-flavored gelato to a disgusting rotten apple, but I just couldn't help mentioning and being negative towards that pseudo-whatever offering by the hack and former Satoshi Kon-impersonator Darren Aronofsky):

1. Barry Keoghan - The entire cast performs admirably, but this 'kid' stands out as the most brilliant actor of them all - he nails his bravura turn with the subtle micro-expressions, soul-piercing looks and amazing self-control, deep-diving into the role of a teenage boy whose presence gradually turns sinister. Each of his appearances is a scene-stealer.

2. Dark (tragi)comedy - Once again, Lanthimos succeeds in imbuing his work with the right balance of dry (or rather wry) wit, utter absurdity, sophisticated audacity and pitch-black, deadpan, sardonic humor that simultaneously makes you laugh (or chuckle, at least) and feel extremely uneasy, regardless of how comfortable your seat is.

3. Precise direction - Kubrick's spirit had been restless during the shooting of this intense, bizarre and  stone-cold psychological thriller, possessing its (methodical) director and guiding him along the way. And when the influence threats to become overwhelming, you get splashed by the awkwardness of the Greek weird wave, and it all happens in regular, hypnotic, expectation-subverting rhythm.

4. Imposing visuals - The starkly beautiful wide-frame cinematography by Thimios Bakatakis (whom Lanthimos entrusts with handling the photography for the third time and for a very good reason) perfectly captures the twisted, ironically mythologized reality of a contemporary bourgeoisie. Their clinically clean world is a slightly distorted reflection of our own, exposing all of its irrationalities with brutal honesty. 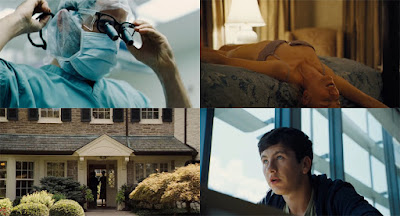