Nick Lindsay and his co-writer star Wendy Falcone take a rather cynical look at ill-advised fame seekers in their aptly titled feature debut.

The film revolves around three fun-lovin' best friends, Christy (Falcone), Sally (Julienne Hanzelka Kim) and Joanie (Marcia Dor), who move from NY to LA - the city that's 'sunny, bright and full of promise' - looking for a life-changing experience. However, instead of going on with their lives, they get stuck in bed (or rather, king size mattress) of a rented studio apartment, self-imprisoned by their own reveries.

The trio's lethargic idyll is broken with the arrival of Sally's love interest, the irresistible musician Simon (Michael A. Nickles), who introduces them to hedonistic ways of glam rock, gradually changing their dreams into nightmares via sex, drugs and booze. As the girls become twisted, over-the-top stereotypes of what they've strived to be, their whacky, increasingly surreal tale turns cautionary and gets infused with caustic commentary on naivety, relationships, American Dream, entertainment industry and what the women (think they) want.

Christy who serves as the (unreliable) narrator is molded as an aspiring actress forced to work as a waitress who carries a luggage full of daddy issues which could be a metaphor for her immaturity. Her confidantes - an airheaded, happy-go-lucky sugar baby, Joanie, and a sulking, slightly psychotic writer wannabe, Sally - are hardly of any assistance to her, considering they are far from being the models of maturity themselves. But, not a single of them is victimized by Falcone and Lindsay - on the contrary, they're ridiculed as much as the showbiz folks (and adulterous boyfriends). They may not be engaging (in the mainstream sense of the word), yet the 70 minutes spent with them is certainly not boring and the entire cast give their campy best to make them interesting.

Camp also comes to mind first when describing the colorful, deliberately tacky sets, mixed-bag soundtrack and somewhat faltering quality of 35mm lensing by Carolyn Macartney (who would collaborate with Yasuaki Nakajima on After the Apocalypse in the year that followed). The same goes for a few chroma key / rear projection scenes that put the film halfway between trash and arthouse cinema, but it's not like this lo-fi aesthetics are without any charm... 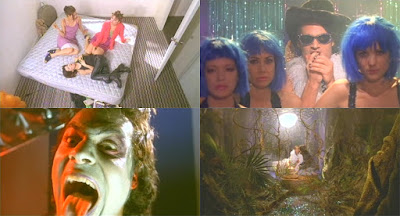 (This review is based on a screener copy provided by Nick Lindsay. Life in Bed is available at Vimeo on Demand, for rent or purchase.)
Објавио Nikola Gocić у 4:41 PM