My brief history of watching Kar-Wai Wong’s films goes something like this:

In 2012, I was presented with the DVD of 2046 – a visually stunning, but overlong and emotionally tepid flick, and around the same time, I came across There’s Only One Sun which was the first advert-film that blew my mind, not to mention Amélie Daure’s resemblance to Milla Jovovich who I’m a sucker for. Soon after, I was recommended Chunking Express, but I dropped it after 15 minutes, only to return to it earlier this year. I thought it was just OK... ish, yet I couldn’t stand that disgusting The Mamas & the Papas’ song that plays 17 times in the second half. (Yeah, I know the number is much lower, it’s just my subjective impression, and thankfully, I love Faye Wong’s cover of The Cranberries’ single Dreams so much that it alleviated the pain caused by f*cking California Dreamin’).

And so, last night, I decided to check out In the Mood for Love which I’ve been avoiding for quite a while, despite the high, irresistible appeal of the stills which are tirelessly shared on social media over and over and over... It turned out to be a huge mistake, because what I saw was a cinematic equivalent of Swarovski crystals, or rather, a series of commercial-like vignettes glued together with a dull, uninvolving melodrama. In fact, I often expected a branded logo of a perfume or alcoholic drink to pop-up on the screen followed by a sexy voice enunciating the tagline. For the first hour, maybe less, I could immerse myself in gorgeous pictures, but afterwards I just stared at my TV in the mood for throwing my remote at it, while constantly checking my watch, i.e. phone. I couldn’t care less for the two leads (there was more passion in the design of dresses perfectly tailored for Ms. Maggie Chung), nor for what they were saying, nor for the subtlety of their body language, because the film didn’t even provide me with the illusion of love, let alone the semblance of a genuine emotion. The very memory of sitting through all that posing, high-brow sentimentality and smoke of a cigarette filling the air in slo-mo-oh-so-poetically awakens nothing but anger, with the 60’s setting and cinematography combined being a saving grace. 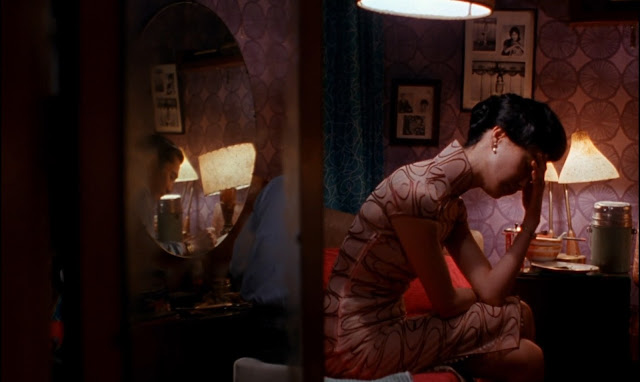