All My Friends Are Funeral Singers (Tim Rutili, 2010) 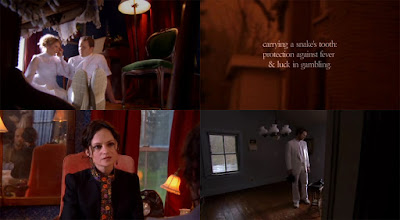 Sporting a disarming smile and a quaint attire, Angela Bettis delivers a charming, dignified performance as a kind-hearted 'psychic advisor', Zel, in the musician Tim Rutili's quirky directorial debut - a companion piece to his band Califone's conceptual album of the same name.

Zel lives at the edge of the forest, in a cozy old house she inherited from her grandmother, along with the talents to read palms and tarot cards, as well as to cast and break spells. Her only family are a bunch of friendly ghosts who, simply put, spend their peaceful posthumous days in her modest home, but also come in pretty handy in divination and fortune-telling business.

However, when a 'heavenly' light appears in the woods, attracting them like moths to the flame, these 'Caspers' realize that they are unable to leave the place and the harmonious household starts to fall apart... in a maddening cacophony of sounds.

All My Friends Are Funeral Singers is the most befitting title for Rutili's 'folksy' supernatural tale of letting go / breaking with the (superstitious) status quo. Following its own twisted logic, it initially appears as a slice of (after)life drama, taking a slightly - but only slightly - darker turn in its second half, while keeping its wry humorous tone and melancholic underpinning intact. In a peculiar way, it breaks the fourth wall via its mockumentary sequences that are almost certainly the work of a specter called Bunuel and serve to shed some light on the restless souls' past. So, we learn that one of them was in a parish rugby league and, ironically, got struck down by lightning, whereby his love interest in a bridal gown hung herself with her something blue.

Even though they are not fully fleshed out characters (in many cases, they are barely sketched), we feel comfortable around them, just like Zel do, and we easily and gladly get involved in their (sur)reality. The non-professionals who make up most of the cast have this je ne sais quoi about them, whether it's the silent and sad-eyed Molly Wade as the youngest spirit Nyla or Alan Scalpone as a former actor in paper slippers who 'sailed off the catwalk' after getting drunk. And let's not forget the 'Califoners' who appear as a sight-impaired band binding the narrative non-sequiturs with their live-on-set jam sessions and thus, establishing the offbeat 'spiritualistic' atmosphere of the film.

To further help you get into the right mood, Rutili inserts some sort of intertitles containing the old wives' beliefs that are likely footnoted in a chiromancer's textbook, like 'if your nose itches you will son be kissed by a fool' or 'a wish will come true if you make it while burning onions'. In addition, his set decorator Keith Kolecki fills the interiors with all the baubles and trinkets you'd expect to see in a clairvoyant's dwelling. The antique magick is captured in the experimental visuals - a combination of crispy clean imagery, dreamy superimpositions and grainy, Super 8-ish intrusions - and dispelled in the final shot that operates as a comment on the illusory nature of cinema. 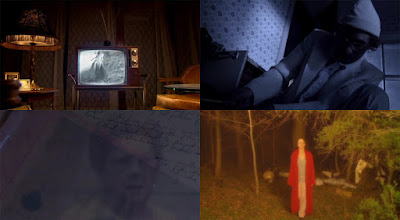