Spirits of the Air, Gremlins of the Clouds (Alex Proyas, 1989)


Set in a post-apocalyptic world that wouldn't look out of place in a surrealist painting, the recently restored debut by Alex Proyas (of The Crow and Dark City fame, as well as of Gods of Egypt shame) is a visual tour de force of overwhelmingly great and whimsical proportions, albeit slightly hampered by dramatic inertness.

A candle-lit hut in the Australian middle of nowhere acts as a home for a couple of siblings, Betty (Melissa Davis) and Felix (Michael Lake), raised by the Christian fundamentalist father who bequeathed them with countless crucifixes of all kinds and sizes hanging around as the only pieces of bric-à-brac. Combined with the aftermath of an unspecified cataclysmic event, the heritage has taken its toll on the flighty sister, whereas the disabled brother clings to the sole non-religious book they have - The Birth of Flight. His passion for aviation (that rendered him cripple) turns into obsession after the arrival of an enigmatic stranger, Smith (Norman Boyd), who intends to cross over the mountains to the north, even if he has to fly. Much to Betty's disapproval rooted in the belief that the interloper is a demon, the two men begin to work on a contraption that will help them overcome the dire situation. 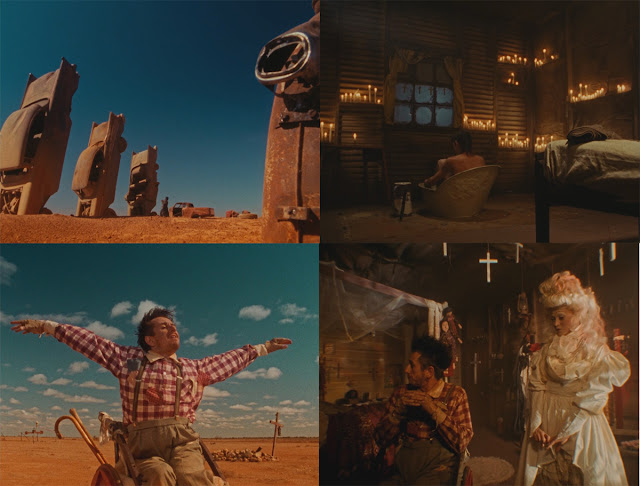 Deliberately paced and laced with absurdities and eccentricities of its characters, Proyas's story of a desire to escape and struggle between progress and status quo could also be interpreted as an allegory for artistic creation, with the trio of protagonists representing different aspects of the author or even the interacting agents according to Freud's psychic apparatus. If we go along the latter theory, we will recognize instinctual impulses of id in Felix, restraining demands of super-ego in Betty and mediating role of ego in Smith, with the performances similarly devised. In his first and only film appearance, Boyd (who is conveniently credited as The Norm) brings some ice to the overheated histrionics of Davis and Lake, especially of the former whose fits of theatrical madness would give many of the silent cinema stars a good run for their money. Identifying with any of them is certainly not an easy task, though the dreamer archetype embodied in Felix comes off as the most sympathetic, despite his manic enthusiasm.

The barebones narrative may not be the most dynamic, logical or engaging one, but it doesn't really matter, because Spirits of the Air, Gremlins of the Clouds provides us with the imagery that is absolutely stunning right from the get-go. As dreamlike and powerful as the desolate vista of rusted caddies buried nose down in the sand, the shots intertwined with the opening credits prove that love at first sight is quite possible. Making sure its flames keep burning brightly all the way to the end are the author's crystally clear vision and the affective commitment of his art department. The vast exterior's turquoise blue skies opposed by the scorched oranges of the desert are gorgeously lensed by David Knaus in a boxy format, and the same goes for the ramshackle interiors of the cross-infected household, not to mention extravagant costumes and makeup that correspond with the paranoid behavior of Davis's (anti)heroine (who would feel as comfortable in some Gilliam's, Jarman's or Jodorowsky's offering). Peter Miller's art direction is impeccable, whereby his haunting and evocative 'Tangerine Dream meets Dead Can Dance' score sets the melancholic atmosphere of the whole proceedings. 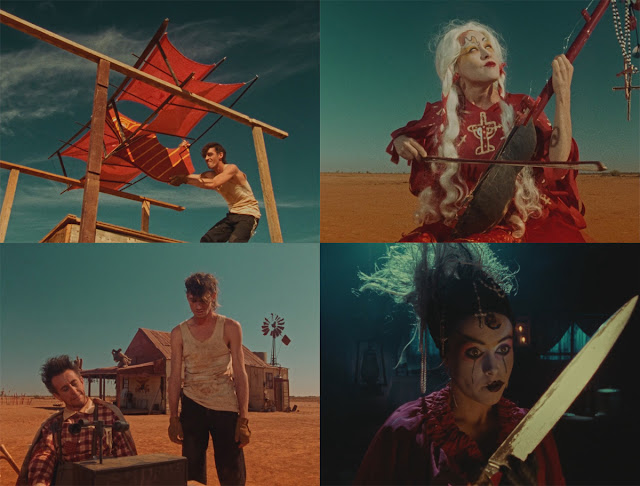