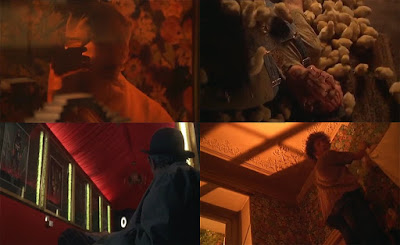 In his second to last role, Marcello Mastroianni simply excels at playing a traveling salesman, Mateo Strano, who falls under time-eating fairies' spell for twenty years, occupying an enchanted Parisian apartment that happens to be just across his previous home. In the meantime, his wife Maria (Almodóvar's regular Marisa Paredes) has been remarried to André (Féodor Atkine) whose morning hangover portends his death at Mateo's hands, after their 'chance encounter' and a strange offer.

However, maestro Mastroianni also takes the role of Georges Vickers - a respectable professor who teaches negative anthropology at Sorbonne University until he decides to assume the life of a 'clochard'. That's how he meets a kind-hearted hooker, Tania (Anna Galiena), who is actually a president of a huge corporation driven to prostitution by her perverse, stuttering ex-husband (Jacques Pieiller). Not to mention that Vickers has a frequently peevish, wheelchair-bound mother.

But wait, in the third story that is - like the abovementioned two and the one that follows - narrated by an unnamed radio announcer (Pierre Bellemare) who, almost certainly, stands as a symbol for someone or something, MM is a butler who responds only to a sound of bell (or in French, cloche) and who is actually an eccentric, filthy rich benefactor of an extremely affectionate young couple, Martin (Melvil Poupaud) and Cécile (Chiara Mastroianni).

Now, hold your breath still for yet 'another' protagonist portrayed by Mastroianni Sr. - the industrialist Luc Allamand who learns from his lawyer (Jean-Yves Gautier) that his fictive mother, sister and daughter are arriving in town. Oh, and let's not forget his 38 years younger wife Hélène (Arielle Dombasle) and the fact he may be Strano, Vicker and Butler, though it's hard to imagine him leading so many parallel lives.

So, what we have here is a delightfully schizophrenic puzzle featuring all the witty wordplay, identity shifts, barrages of dialogue, intellectual trickery, surrealistic interweavings and preposterous meta-twists you could wish for, all masterfully packed as an intriguing, light-hearted and immensely amusing prequel to Lynch's Lost Highway. (Seriously, these two complement each other like yin and yang!)

On top of that, Ruiz (who has become one of my favorite directors during September of 2017) pokes some fun at Europeanization, given that all the events are in some way related to Rue Maastricht which alludes to TEU. Identifying it as a spreading disease, he invents a phony psychoanalyst who congratulates Allamand on his vivid imagination and sees his split personality as a sign of success.

Beneath the playfulness of his tight, clever script co-written by Pascal Bonitzer (with whom he'll cooperate once more on Genealogies of a Crime), one can recognize a melancholic tale about the hardships of old age, senility in particular, which adds an emotional resonance to the irational proceedings. As the film progresses, you have an impression that you are following the protagonist down the spiral of madness while simultaneously being lifted to the realm of dreams.

This oneiric quality is supported by the entrancing visuals - Luc Chalon's meticulous, flamboyant set design (including Escher-esque bric-à-brac, as well as the prominent use of mirrors) and Laurent Machuel's stunning cinematography paired with purposely disorienting in-camera effects. Under Ruiz's watchful eye, these illusionists make wonders you are unlikely to see elsewhere... well, that is unless you're seeing some other masterpiece from Ruiz's oeuvre, such as Love Torn in a Dream.

Three Lives and Only One Death (Trois vies et une seule mort) inspires in mysterious ways, warning you that 'extreme happiness is a form of misery and extreme generosity a form of tyranny'. 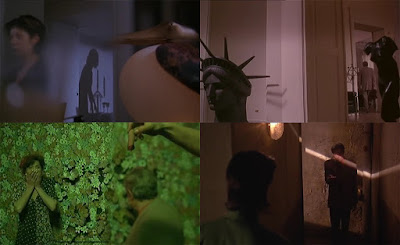