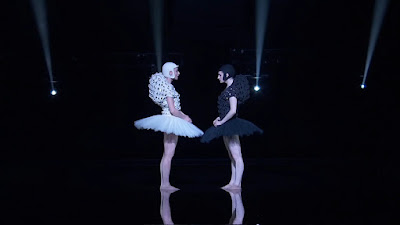 Watching A Swan Lake by Swedish dancer and choreographer Alexander Ekman feels dangerously close to discovering a whole new world, with its own (fickle) norms and (twisted) logic.

It starts a long time ago (actually, in anachronistically chaotic 1877, the year of the original ballet's premiere) in a land far away (more precisely, in Swan Lake City). Following a bit of yelling, opera singing and a lot of door slamming, which introduces the eccentric citizens in peachy costumes, is The Artist's desperate search for big idea, undermined by The Producer's grumpiness and drugged Ornithologist's advices (!). And, believe it or not, this (and by 'this' I mean deliriously farcical Act I) is as close as this wicked extravaganza comes to Tchaikovsky's famous piece.

Act II is set 137 years later, with the Main Stage of Oslo Opera House filled with 5,000 litres of water, which simultaneously limits and propels the dancers' movements, while being a character on its own. Ekman is in full command of a demanding, muscle-wearing choreography, and yet it seems as though his "subordinates" are transported back to favorite childhood playground, having loads of unadulterated fun. Most probaby inspired by Pina Bausch's idiosyncratic Vollmond, the mischievously imaginative author delivers a lavish avant-garde spectacle of absurdly surreal proportions, surpassing Mathew Bourne's daring gender-swap version in every way. Armed with bizarre sense of humor, he brings hundreds of rubber ducks and multicolored beach balls into the "game", with more soprano intrusions and some brass music attacks, after a cuddle & slap party between Odile and Odette. Replacing the source score with Mikael Karlsson's cacophonous atmospherics can be seen as another bold decission, but the outcome is simply fascinating!

With Danish designer Henrik Vibskov's futuristic upgrade or complete removal of tutus, Ekman's fairy-tale de(con)struction reaches brand new level of pure creative madness, mirrored in a shark dressage (or was it just walking?) near the end of Act II, and a robot breakdance from just a few seconds long Act III, which is posing as a good punchline. Multi-medial and multilayered, A Swan Lake might even appeal to some ballet haters, and it will certainly be adored by all who enjoy revolutionary (post)modern art in any of its many forms.

Email ThisBlogThis!Share to TwitterShare to FacebookShare to Pinterest
Ознаке: balet