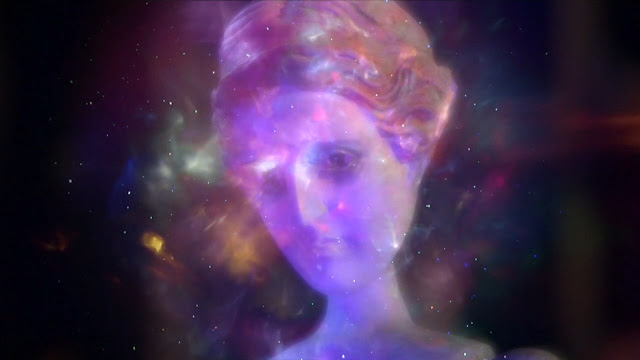 Inspired by the work of Giorgo de Chirico, Yves Tanguy, Jean Cocteau and the Quay brothers, The Metaphysician's Dream is another superb addition to the pantheon of surreal stop-motion films. Elevating its classy appeal is the fact that it is virtually a one-man show - William Kersten is its director, animator, cinematographer, production designer and music composer, with the elegant score of oneiric proportions performed by the Vienna Symphonic Library software.

Inviting you into a vast, phantasmagorical world is a mellifluous and somewhat mysterious opening track which accompanies decidedly archaic, silent era-inspired title card, credits and epigraph, and fades to silence pierced by a subtle needle-on-a-worn-record crackling. After the curtains are drawn open, we enter a delightfully retro atelier-laboratory where a couple of scientists or rather, alchemists are about to consult their books and perform a series of puzzling experiments resulting in an interdimensional exchange of sorts. As the title suggests, a highly unconventional story plays out like a dream, so most of it is left to the viewer to decipher, or simply allow it to be smitten by its magic.

Amongst the apparatuses and contraptions of obscure purpose, neatly shelved bottles containing various potions, and concrete blocks turned cosmic kaleidoscopes, one can easily get lost, but the non-speaking protagonists seem to know exactly what they are doing. Appearing as wooden mannequin dolls with heads of expressionless Hellenistic sculptures, they may be viewed as modest embodiments of some mystical, supernatural entities who hold the secrets of the multiverse, and are in complete control of time-space. As they establish a link between the past and the future through their present (and cryptic / esoteric) actions, Kersten approaches his cosmogonic fantasy (and perfection) with high attention to details, and in a tight, fifteen-minute frame, he delivers spellbinding imagery in spades, not wasting a single frame of a wonderful old-school animation. Beiges, browns and grays of his characters' bodies and sets are beautifully complemented by vivid colors of props and lighting, whereby the soft focus is frequently used to enhance a hypnotic, ethereal atmosphere. On top of that, The Metaphysician's Dream is paced so smoothly that watching it feels like drifting on a cloud. Kersten's meticulousness, vitality and creativity are pure inspiration...

The film is available on the author's official YouTube channel: