In the first gory animated horror to come from the USA in years, Groundhog Day (minus the comedy, and heartfelt parts) meets Saw under the wakeful eyes of bored divine forces, with William Shatner as the narrator (i.e. The Overseer) adding the strong Twilight Zone vibe, and Ray Wise voicing and lending his appearance to a diabolical industrialist and pater familias of the highly dysfunctional DeKalb family. The gods' 'emissary' is a mysterious (and not to mention sexy) entity called Gamemaster (Morena Baccarin, vocalizing the right mix of danger and seductiveness) who looks like she escaped from an issue of the Heavy Metal magazine, and whose rules often change, making the survival game pretty difficult for the film's peace-activist heroine Miriam DeKalb (Dani Lennon) and her siblings. Once you get used to cheaply animated, yet beautifully 'inked' characters, To Your Last Death provides you with lots of bloody, cheesy and tightly paced fun pierced with hints of cosmic dread. 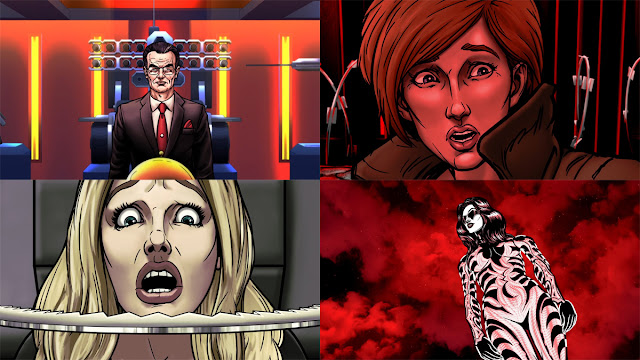