How do you begin to describe a beautiful (celluloid) dream, one you can't remember in its entirety, yet you're absolutely positive about the firm hold it had over you? Maybe with another turn of an old vinyl whose soft crackling transfigures your memory?

A hushed voice which may be an emanation from another world tells us: "I've been here a long time. How long, I have no idea. I don't remember." And right from the get-go, it sets the ethereal atmosphere of wonder. We don't know where exactly is here, and neither who or what lies beneath the pile of dry foliage on a sofa, yet we feel the warmth of hazy imagery of earthy tones in the subsequent montage which suggests hypnagogical illusion.

Very soon, we are introduced to the strange characters existing at the dawn of cinema, yet simultaneously belonging to one of its many dusks. A wealthy eccentric right out of a steampunk fantasy, Dr. Epstein (Alain Servant), conducts a series of uncanny experiments, subjecting his own adopted sons wittily named Pete and Re-Pete (Henrik Garo and John Linnane), as well as his "darling flapper" Baby Dee (Natasha Everitt) to various tasks. Together with a lady credited as The Somnambulist (Ambra Gatto Bergamasco) whose mental state appears to be deteriorating, they inhabit a remote rural estate. The arrival of The Whisperer (Conn Rogers) and a mysterious couple (Enda Moran and Trish Murphy) who wouldn't be out of place in some diabolic carnival leads to the awakening of an creepy figure, The Widow (Cillian Roche), whose haunting presence brings forth the nightmare...

All the while, Michael Higgins - "the Vagabond of Experimental Film Society" (according to Donal Foreman) - demonstrates the magic of creating hypnotizing moving images on an expired 35mm film loaded into a 50-yo Soviet camera! Although the silent era is where the bulk of his inspiration comes from, one can't help but recognize a myriad of other possible and seamlessly assimilated influences, ranging from Italian horror to Wojciech Has or even Seijun Suzuki. ('Tis all just an assumption, but for some reason, The Hourglass Sanatorium and Taishō Trilogy popped into my mind more than once.) The strong fragrance of nostalgia that both the antiquated technology and cinematic role models emanate with never wears off - instead, it is gradually infused with sharp hints of (post)modernity, which as a result has Autumnal Sleeps transforming into a timeless work of esoteric avant-garde. In other words, while relying on the ghosts of the past, Higgins invokes the phantasms of the future.

Bleeding colors, grainy textures and striking compositions make virtually every shot worthy of framing and mounting on the wall of an art gallery, whereby the overwhelming power of the lavish visuals is further enhanced by the somber gothic-industrial score laced with effervescent vintage tones. In the alchemical fusion thereof, the evocative, sublimely lurid phantasmagoria is born. 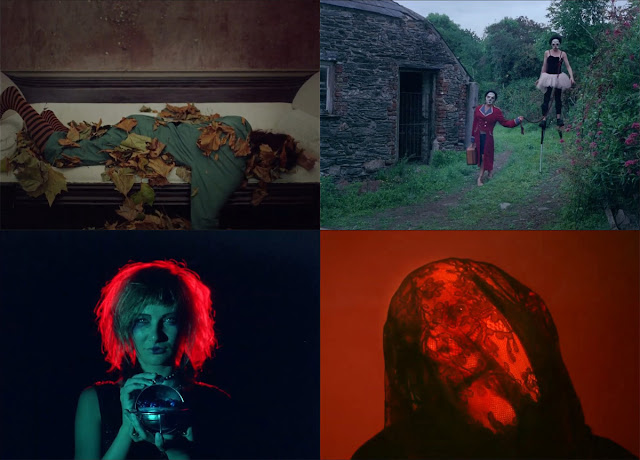 (This review is based on the private screener provided by the author.)
Објавио Nikola Gocić у 22:55