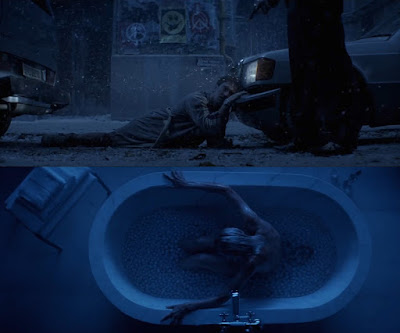 I shall start this review by saying that Atomic Blonde is hands down the most fulfilling cinema experience I've had this year so far. Despite the fact that action spy thrillers are not my cup of tea (I don't remember the last time I sit through a James Bond flick), I just couldn't take my eyes off of the screen - the movie is as gorgeous as its star.

In his first solo directorial venture, David Leitch finds a fiery, feisty, ass-kicking muse in Charlize Theron whose magnetic physical presence, disarming charisma, scene-stealing performance and even charmingly fake British accent give the most (if not all) of her 007 colleagues a run for their money. With stately grace and (ostensibly) frigid stoicism, she portrays an MI6 agent, Lorraine Broughton, who will use everything at her disposal, from red high-heels to a rubber hose, in order to defeat the seemingly stronger opponents standing in the way of her mission.

And speaking of mission, she is sent to Berlin during the Cold War and tasked with investigating the murder of a fellow agent (and possibly a lover, as we are informed via dreamy flashbacks), James Gasciogne (Sam Hargrave), and retrieving a compromising list of double agents, in days preceding the Fall of the Wall. Partnered with a rogue-ish station chief, David Percival (James McAvoy, sporting a Sinead O'Connor hairdo, at the top of his game) and tailed by an enigmatic woman (Sofia Boutella's seductive Delphine Lasalle), as well as by the savage Eastern Bloc spies, she navigates through a risky, dangerous game of politics and intrigue including a healthy dose of double-crossing and back-stabbing. 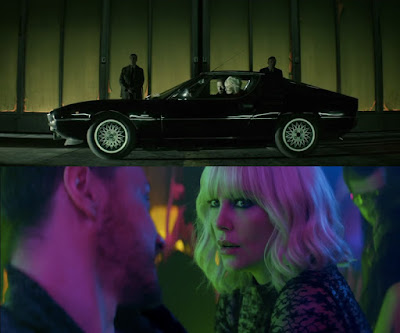 A simple, yet a bit convoluted story - adopted by Kurt Johnstad of 300 fame from Antony Johnston and Sam Hart's graphic novel The Coldest City - is the film's least hard-hitting aspect and plays out as a campy version of any given Bond or Bourne scenario. However, Leitch helms with such verve, energy, lightness and confidence that the film remains incessantly engaging and exciting, whether it's vintage cars rolling over or Lorraine (frequently) lighting a cigarette that we are shown. Not to mention his mind-blowing style over substance approach never fails.

For this ex-stuntman turned director, Lorraine's character is a logical progression and a much cooler creation than Keanu Reeves's John Wick of the eponymous 2014 elite assassin fantasy which he is uncredited for. His hot and extremely skilled blonde appears capable of stopping an atomic disaster if needed, even though she's not adorned with any super powers that would help her bruises heal faster (since icy baths rarely do the trick). Indeed, the fashionable heroine is represented through the male gaze, especially in the Blue is the Warmest Color-esque sequence of, ahem, extracting a piece of information, yet Theron's gravitas, self-esteem and intelligence form a sort of feminist armor around her.

As commendable as Ms Broughton's fighting maneuvers (where Leitch truly shines) are Johathan Sela's astonishing cinematography and the authentic, slightly modernized throwback to the late, simultaneously glamorized and deglamorized 80s, replete with musical hits of the time, weirdly juxtaposed 99 Luftballons being the stand-out. Combined with beautifully designed costumes, both steely grays of Berlin's exteriors and the neonized (or just saturated) colors of classy interiors provide loads of shots worthy of a gallery wall. With eye-candy in abundance, the monochrome imagery of the debriefing room - that serves as a 'red-herring teaser' and sees Toby Jones and John Goodman as Lorraine's superior and CIA agent, respectively - waters down the overwhelming sweetness and allows the viewer to catch a breath.

And let's not forget the tight editing (kudos to Elísabet Ronaldsdóttir) and that crazy, totally unexpected homage to Tarkovsky which is also one of Atomic Blonde's highlights. 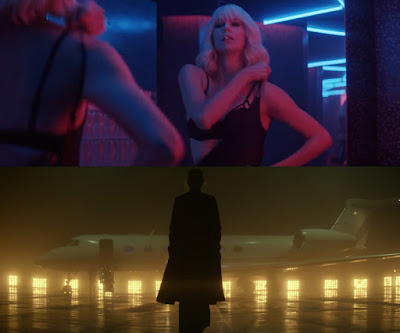