"It was full moon, a poetic light was cast over everything, which threw mysterious shadows and glistening sparkles on the river, as if eternity were being created." 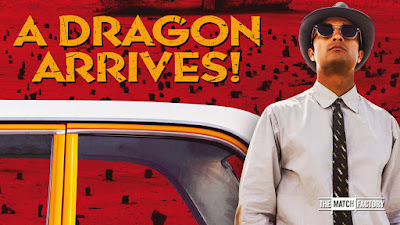 What do you get when you blend a western-esque noir look-alike with a talking heads mockumentary and then wrap it up in a tinfoil of folkloric mysticism and superstition that has previously been sprinkled with a handful of odd humor, political undertones (or rather overtones?) and the 60s grooviness? Well, the answer is this - a bizarre magic realist spy thriller that bends the genres and blurs the boundaries between fact and fiction with the greatest ease.

At the beginning that's set day after the assassination of Iranian prime minister in January of 1965 (and in one of the film's 'true event' twists), our dandy, ahead-of-his-time detective protagonist Babak Hafizi (Amir Jadidi, brilliant and with a voice to die for) takes us to an abandoned cemetery next to a shipwreck in the middle of Qeshm Island's nowhere. The ride couldn't be more pleasant (even if you're not a fan of riding across wasteland), because he drives an orange Chevy Impala - a vintage machine that is just as gorgeous as the sandy landscape spellbindingly captured by Hooman Behmanesh. (With a cinematography like THAT you can get away with the most banal of stories which is not the case with this delightful mind-boggler.)

Anyway, Babak has been tasked with the investigation of an ostracized prisoner's suicide appearing to be a homicide despite the 'wall diary' that just screams: "Madman!" Warned by his colleague of local legends regarding ghosts and strange earthquakes whenever a body is buried, he still decides to have an overnight stay. However, on the very same evening he learns that there might be some truth in the tall tales he was told, so he leaves the island only to return in the company of a geologist, Behnam Shokoohi (Amir Homayoun Ghanizadeh), and a hippie sound engineer Keyvan Haddad (Ehsan Goodarzi), to find out why the earth opens its mouth only at the old (and cursed?) graveyard without affecting the nearby village.

These three men's peculiar 'adventure' that might have supernatural elements attached to it is presented in a non-linear fashion, with bits of information revealed via ominous secret service interrogations, as well as the pseudo-documentary interviews including the witty director himself. One of the reasons Haghighi chose to make this film is, in his own words, a time capsule-like metal box he found at home and the involvement of Keyvan Haddad who supposedly worked on a 1964 drama The Brick and the Mirror helmed by his grandfather filmmaker, Ebrahim Golestan. He invites us to play a sort of 'meta' game with him and his team, subtly and occasionally pulling the rug beneath our feet, as his narrative veers in unexpected directions. The viewing experience - enhanced by the pulsating score that bridges the gap between modern electronic and Iranian traditional music - is quite absorbing, especially if you prefer your cinematic dish served with some extra mystery gravy and absurdly sweet, almost Kafkaesque desert.

Although it is hard to figure out the meaning of the whole proceedings and whether Haghighi speaks in metaphors or simply attempts to out-troll both Lynch and Lanthimos, there's a lot to admire in his bold and unique, somewhat Ruizian smorgasbord.