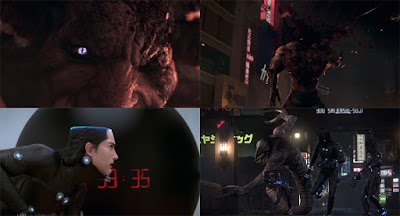 Speaking of guilty pleasures, let's take a look-see at the latest rendition of Hiroya Oku's manga Gantz notorious for its explicitly violent and sexual content. Produced by Digital Frontier studio of Resident Evil: Degeneration / Damnation fame, Gantz: O covers original work's Osaka Arc, keeping the shock factor in check. If you are not familiar with any iteration (including more than a decade old anime series and a couple of live-action features from 2011), there's a great chance you won't like O (let alone know what the *beep* is going on), as it puts you in medias res and offers little to no explanations.

Delivering an immensely amusing, if not very intelligent (read: stupidly fun) sci-fi-action-horror flick, Satō (Karas, Rage of Bahamut: Genesis) and his newcomer co-director Kawamura favor exploding heads, as well as bombastic, larger-than-afterlife monster-bashing to the narrative and characterization. The only protagonist of some depth is a goody two shoes hero Masaru Katō whom we meet in a subway, as he carries a B-day cake for his younger brother, and then see stabbed to death by a psychopath, when he tries to help another victim.

Soon afterwards, Masaru realizes he's still alive and well in a nondescript office of sorts where he is introduced to a small group of people who also died and are now forced to fight alien creatures invading Tokyo and Osaka. Their employer or rather taskmaster in what seems to be a survival reality-show game is a huge, black, enigmatic and chauvinist sphere called Gantz. Long story short, our mullet-sporting protagonist breaks the world record in putting on a skintight suit and enters the battle. And that's not all that happens during the first fifteen minutes!

As you might have already guessed, this film (which barely reaches the hour and a half mark) runs at breakneck pace, almost never letting you notice how cheesy the dialogues are, let alone question the decisions made by the "players". On the other hand, it provides plenty of hyper-realistic, Final Fantasy-level CG-eye-candy of blood gushing and pure, unadulterated, kaiju vs. giant robot mayhem. Great attention to details is reflected in hair animation, as well as jiggle physics for two beautiful female characters (a model from a shampoo ad, Reika, and a young, quirky single mom, Anzu), in accordance with the target audience - everybody who is or occasionally feels like a teenage boy.

However, the highlights of the gory show are the extraordinary monster designs that seem to be inspired by the Japanese mythology, seeing that most of them appear as yōkai, from Wa nyūdō to Daitengu. Maybe it's the authors' way of saying we are all still facing the demons of the past and maybe that one form of the most dangerous enemy composed of writhing, nude and headless women is supposed to be an edgy critic of misogyny. With all those neon signs blinking from the skyscrapers, one might read a satire on consumerist society into Gantz's schemes, but that would be a serious case of overthinking.

Thankfully, the cuts in the scenes of carnage are not of the blink-n-miss kind, so you can actually follow what is going on (which can not be said for plenty of modern movies) and enjoy the mandatory slow-mo effects. The terrific visuals are complemented by solid voice-acting and epic-like music, making Gantz: O a decent time-waster. 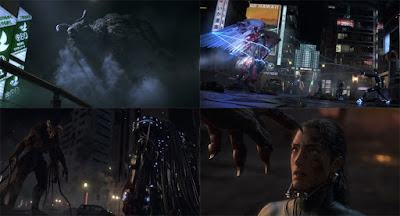